Orlando, FL -- (ReleaseWire) -- 02/10/2014 --F. Ethan Repp’s, Power Play: A Tale of Political Intrigue introduces the handsome young Collier Winthrop who must unravel plots unseen and unimaginable, to survive even the earliest months of his political enterprise.

History repeats itself. Take a ride back memory lane to the 1970's to a tale of deceit, revenge, militaristic police, affected legal system and gay tragedy. This is the end of the Hoover era. This is deep in the death throes of the Nixon debacle. The author captures this era, while depicting a battle for the soul of the Republic, at the local level.

Read as events uncover sordid police mentality and unveil violated civil rights of the Flower Children. Watch as reputations are ruined and these events threaten the very lives of Collie's confederates. Politics is a business of expediency, and otherwise decent people justify immoral behavior in defense of careers. 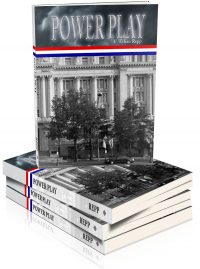