The Greatness series encompasses the history of Korea from the 1940 invasion by Japan to the present. Mija, a Korean girl, and Ichiro, a Japanese college student, accidentally fall in love. Although parents of both offspring order the two to avoid meeting, they disobey their parents and marry.

Through this marriage, a variety of obstacles are created and we learn the intimate details of Korean culture, history, and manners. The conflict between Japan and Korea, symbolized in part by this unusual marriage, threatens to tear the fabric of such a union. Through the eyes of Ichiro, we learn much about South Korea, its strong work ethic, its ability to move onward against impossible odds.

The Greatness series consists of The Phantom of Greatness, The Way to Greatness, The Devastation of Greatness and The Triumph of Greatness. This four part series is an epic fictional documentary of the years when Korea was under the oppression of the Japanese. That invasion, in 1940, created problems that the South Korean people are still struggling with today.

About Chi Sun Rhee
Chi Sun Rhee is a retired gynecologist/obstetrician. She is the mother of two sons and a daughter and is the author of several acclaimed novels. Her desire to write this unusual history of Korea in a four-part series of books is a dream she has had for several years. Chi Sun Rhee is a resident of Toledo Ohio, where she resides with her husband John and pursues gardening as her primary avocation. 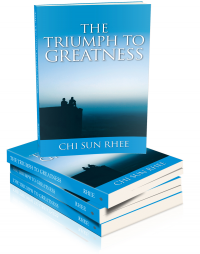