Close to Evil, by author Peter Brown emerges from the shadows of high finance and big money to tell a tale of salacious family secrets, corporate intrigue and murder.

Sarasota, FL -- (ReleaseWire) -- 06/03/2013 --Peter Brown’s book Close to Evil introduces the abrasive, and downright brazen Jack Stanton, Private Investigator. Impeccably groomed corporate lawyer Sue Barker thinks he is disgusting, but Jack Stanton may be the only person who can find her sister’s killer.

Basking in trillions of dollars of cheap ‘fiat’ money printed by Central Bankers, the ‘One Percent’ were hard-pressed to find that special ‘look at me’ item on which to spend a tiny smidgeon of all their newly acquired largesse. Small wonder spirits ran high and the champagne flowed freely.

A phone call changed all that. The luscious and serially promiscuous Chrissie Barker has been brutally murdered.

Somebody’s been doing the world a favour and bumping off all the City’s top bankers. But did that same somebody kill Chrissie Barker?

The police think so, but Jack Stanton has his own ideas. Follow Jack as he uncovers the seedy world of corporate machinations in order to solve a sordid murder.

Author Peter Brown was once Head of Research for a major stock-brokering firm and knows all about the shenanigans that bankers get up to; knows all about the hollowing out of middle class America by globalization; knows all about the opaque world of thoroughbred horse breeding and racing; and he brings all of that knowledge to bear in this entertaining and fast-paced journey into hell to unearth a killer. 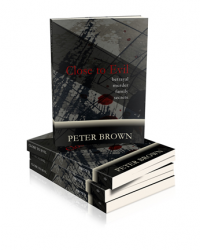