Comic seeks to bring to life the mysterious monks who lived on the island over a thousand years ago.

Wisconsin Rapids, WI -- (ReleaseWire) -- 08/16/2017 --Writer Philip Kosloski, along with artist Michael LaVoy, launched today a new comic book entitled The Last Monks of Skellig Michael on crowd-funding site Kickstarter. The two have set out to raise $7,500 to complete production of the action packed comic book, making it available to the general public.

The Last Monks of Skellig Michael is a new comic series that explores the radical life and exciting adventures of the ancient monastic community on the island known for its appearance in Star Wars films The Force Awakens and The Last Jedi. It follows a young man who is struggling to find his place in the world and who defiantly travels to the distant isle off the coast of Ireland. What happens next is beyond anything he imagined.

"It's a story about faith, trust and following your 'gut' when everyone else is against you," says writer Philip Kosloski. "The comic also seeks to highlight the spiritual world that is often hidden from our eyes, but on occasion reveals itself in a miraculous fashion. In developing this comic it brought together two passions in my life, Star Wars and the Catholic faith. There are no lightsabers in this story, but let's just say that the 'Force' is strong with this one."

The Last Monks of Skellig Michael Kickstarter campaign will run from August 15 - September 12, 2017.

About the Creative Team
Philip Kosloski is a writer well known for his popular articles on topics of spirituality and Church history at Aleteia.org as well as his best selling non-fiction book (The Last Monks of Skellig Michael) on which this project is based on. Michael LaVoy is an up-and-coming artist known for his stunning Living Sparks of God coloring book for kids.

Jim Fern will be designing the cover artwork and is an active adviser on this project, ensuring a quality comic book. Jim became an inker for Marvel in 1983, working on various Spider-Man titles. He later started penciling as a fill-in artist on titles such as Amazing Spider-Man, X-Men Annual #13 (where he co-designed and drew Jubilee in her first story), Transformers, and Wolverine. Fern also started working with DC Comics as an artist on such titles as Legion '90, Adventures of Superman, Batman, Detective COMICS, and co-created the series Scarlett. He is also co-creater and designer for Crossing Midnight with Mike Carey published by DC's Vertigo line. In addition to his comic book work, Jim has worked as a Walt Disney World artist for the Disney Design Group. 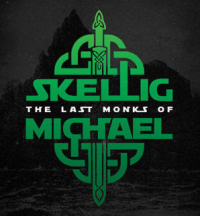