San Juan Capistrano, CA -- (ReleaseWire) -- 03/30/2018 --Dragon Lords, The Battle of Darion, is a new skirmish based card game, allowing two players to build armies and then battle one another for dominance. Players have several types of units to choose from, including dragons, knights, monsters, heroes and spell users. Players can defeat the enemy's forces with unique battle dice and spell cards.

Play begins by choosing armies based on a total of 55 points, containing at least one dragon and one knight. Then, each player builds a deck of Spell cards, totaling 10 points.

For gameplay, the play area is divided into three zones: each kingdom and the battlefield. Players move units into zones, performing attacks, taking resources, casting spells and retreating. Each unit has a wealth of information on the card, including attributes like name, race, morality, class, armor rating, orders and abilities. At the bottom of the unit card, dice information is contained. Throughout the game, units can be upgraded with new armor or abilities.

Attacks can either be melee performed on units within the same zone as the attacker or long range, where spells can be performed on units in other zones. Dragons take the lead as commanders. Adding a knight as a mount allows the dragon to be more powerful. Players can make their army even more robust by summoning creatures. Spell and Order decks direct or modify attacks, improve defense, heal or perform special actions.

The game is currently being presented to contributors on Kickstarter. The artwork for the core game has been completed. The creators, WolfLord Games, have a lot experience in the realm of game design and are excited to launch this new project. WolfLord Games states, "Dragon Lords: The Battle of Darion is an exciting game that allows players to use their intelligence, unit selection strategy and dice rolling skills to defeat their opponent. With so many options for units, summoned creatures and spell cards, no two games will be the same."

Explore more about the game, see the initial artwork and make a funding pledge here.

About WolfLord Games
WolfLord Games is a company of game designers and video game artists who have come together to develop board games. This team has worked for Microsoft, Sony and Blizzard Entertainment. The company is located in San Juan Capistrano, Calif. 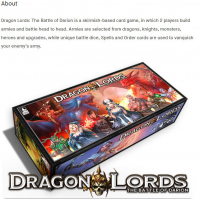