New Electro-Pop Release from 'Hooyoosay' Offers Nothing but Sunshiny Fun

London, UK -- (ReleaseWire) -- 09/22/2014 --When Lewis Carroll wrote his famous epic poem called Jabberwocky, it made sense in a delightful, humorous and nonsensical way. All these years later there is still room for language that hovers around words of whimsey and dramatic play.

A new cadre of talents have released a couple of electro songs full of energetic pop (EP), with one of them bearing the equally whimsical title of “Googly Goo.” For various reasons, the group, called hooyoosay, elected to go a non-traditional route and opted for no credit and no gigs when they released the single on iTunes and Amazon. Contributors to the ongoing project have changed as hooyoosay continued producing additional pieces, such as when they released another mirthful song called “Tare Too Te Rut Te.” Like the first signature piece, this one reeks of flightiness. The goofy Googly Goo Kid, as seen on the smile-laden YouTube video, has served the cement in the hooyoosay brand.

About Avante Garde
This avante garde music recording project incorporates a diversity of skills, including that of one extremely young boy who wanted a lead vocal to be included. Traditional instrumentation was mostly set aside and synthesizers were involved in generating the quirky EP tunes. You also get snatches of guitar solos. When electro-pop, also called synthpop, is used in songs, it brings a slice of pop and rock into the atmosphere in a minimalist approach. When you add nonsensical lyrics, you get a whole new way of singing and bringing top-level enjoyment and dance-worthiness to listeners.

In the Googly Goo video, a youngster exclaims his intense satisfaction with the wonders that his eyes behold when he touches a PC tablet. The song conveys a pleasant feel good mood and a high level of sunshiny cheer. The translation and vibe that comes across in “Tare Too Te Rut Te” is “We feel fine.”

Two additional tracks convey the same radiant joy and fantastically fun mood. With the combined total of four tracks, listeners digest a message that seques from an early childhood feel to a tween and teen-appealing vibration.

Just as is true with Lewis Carroll's “Jabberwocky,” these nonsensical songs make sense in a weird way, attract interest and attention and provide so much amusement.

In truth, invented words and combination terms resonate with people. Such words can often have understood meanings and others are open to interpretation and creative ideas of what they could potentially mean.

What is not doubtful about the two aforementioned EP songs is that they provide a message of unspeakable and everlasting delight.

The video combines fragments of the songs "Googly Goo" and "Tare Too Te Rut Te". To view the YouTube video, go to https://www.youtube.com/watch?v=WFCjiKw2P1I 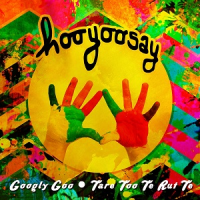