El Paso, TX -- (ReleaseWire) -- 04/27/2018 --Sexual harassment scandals have exposed the entertainment industry in recent months. Thanks to the popularity of the #MeToo movement, more and more women are coming forward to call out those who have sexually harassed, assaulted or abused them in the past, including Harvey Weinstein and other prominent figures.

The "casting couch" mentality has long plagued Hollywood, and many industry professionals are fed up with these injustices. That certainly includes filmmaker Alex Refaeian.

Refaeian hopes to further expose and emphasize the abuse of power in Hollywood in his new short film, Simon Says. The film tells the story of Mark, an up-and-coming TV producer. As he rises to stardom, he finds that he is no longer satisfied with his normal family life and begins to seek stimulation elsewhere.

Mark follows in the footsteps of his mentor, Simon - a well known Hollywood producer who has normalized sexual abuse and in doing so, normalizes it for all emerging film professionals who look up to him. Upon his invitation, Mark begins to question the morality of his urges and the decisions he makes as a father of a young girl. It is only after Mark arrives at the party that his questions are answered.

In hopes of adding a documentary touch to Mark's fictional story, the film will also incorporate archival footage of Hollywood abusers and victims. Although the story is fictional, the parallels it draws to the industry at large are incredibly real.

The cast and crew have already finished filming the movie and are now ready to move on to the post-production phase before releasing the film to the public. To help further this goal, Refaeian and his team have launched a crowdfunding campaign on Indiegogo.

The funds raised will go towards color correction, editing, an original music score, and other finishing touches to get it ready for film festival audiences. Additional funding will go into entry fees for the film festivals, as well as procuring archival footage.

The campaign has a funding goal of $10,000, of which it has already raised more than $1400. The campaign will run for another two months. Those who contribute to the campaign will be rewarded with a variety of prizes based on their contribution level, including social media mentions, onscreen credits and digital copies of the film, to name a few.

The Simon Says crew deeply appreciates the care and concern of its fans for this important cause. Those who are interested in more information can check out the trailer in the link below and share it with their friends. 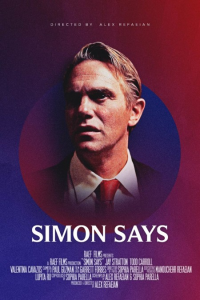