New York, NY -- (ReleaseWire) -- 08/24/2016 --One of the most exciting Artists of 2016 has released his new hit single I Got Work. The new single by GetmoneyGov aka Governor Brown features Young Tay and is now available from ITunes, Tidal and leading digital download platforms. The track has been distributed by E1 Media Enterprises and is available from all digital venues.

The Harlem New York artist who gained attention for his release "Once Again"(Drake,Fetty Wap, Future Diss track) has been described as the future of hip hop. The artist has his own style of music, which has gained him fans all over the USA and now the world. With the beats of the music and the words that flow, Getmoneygov knows what it takes to write and release a new song.

I Got Work featuring Young Tay has been described as Governor Brown best work to date. Although the artist has gained a cult following in New York, many believe that cult following will expand to the whole of the USA and the world. The artist who has never performed outside of the USA has become a big hit in the UK in places like London and Manchester where the hip hop scene receives a lot of attention.

The new hit single I got Work is expected to take Governor Brown to the next level. The Hip Hop star has already become a talking point with many fans believing he will become one of the best known hip hop stars in recent times. Fans and music reviewers who have already heard the latest track have said the artist's fans are in for a treat.

To listen to I Got Work by GOVERNORBROWN #np on #SoundCloud https://soundcloud.com/governorbrown/i-got-work-1

About Getmoneygov
Getmoneygov is an artist from Harlem New York. He has gained a cult following in New York and around the USA. His new single is expected to go global and make more people around the world aware of the exciting hip hop artist.

Getmoneygov aka Governor Brown New Hit single I Got Work featuring Young Tay. It is Distributed by El Media Enterprises. Getmoneygov previous release Thotdaddy Warbux has a cult following from the streets of New York to Nevada. Promoting his Pimp dialect and distinctive Rap Flow that can't be mistaken for nobody else. From the residence in his voice, to witty punch lines and futuristic production by Gosilla and Maestro beats it's definitely a project that not only hip hop fans, but listeners of good music need to hear. 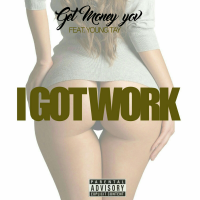