Nicholas Paschall wanted to write a book that would leave people gripped with each new story they read. The aim of the book was to write a chilling short story to grip the reader and take them into a dark world and challenge them to read each new story.

The new horror book has gained worldwide exposure and caused excitement with horror book fans. Book reviewers have called Grimlocke Chronicles thrilling, scary, and hard to put down. Horror fans who have bought the book have called it dark, scary, chilling, and engaging, making it one of the most talked-about new horror books of 2016.

There are not many horror books out there that can grip the reader and make them believe they are part of the story. Nicholas has been clever with the way he drags the reader in and not letting them go until the very last page.

Nicholas Paschall said: "The response I have received with my new book has been overwhelming. I have had a lot of people ask me if there will be a follow-up to the Grimlocke Chronicles."

Grimlocke Chronicles, which is 235 pages long is currently priced $2.73 and is available as a Kindle download. It has quickly become a fast seller on Amazon and has received five-star reviews including:

Anne C. Shipman said: "This is a fantastic bedside book, if you love having nightmares to read about. The author has produced several dozen very entertaining and eerie short stories of horror that will be appreciated by a wide variety of readers. The author's style is provocative, descriptive and engaging."

About Nicholas Paschall
A horror author with tales clawing their way out of his skull, Nicholas Paschall has been in the business since 2011. Published in sixteen anthologies with one novel, he's made himself a name for short, descriptive tales with bursts of gore after the suspenseful buildup, along with stories that take a turn for the weird. 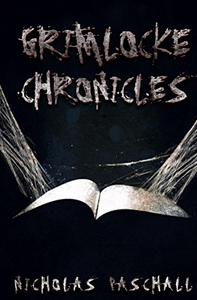