Laiakula, Estonia -- (ReleaseWire) -- 02/09/2016 --The new Forex-Battle game, funded through FundedByMe, may be the high point of the year for video game enthusiasts who love the idea of being a stockbroker. Developed by CEO Grigory Chepcov, leading programmer Lina Zaharova, and their team, offers several different modes for gamers who want to discover what Forex trading and foreign exchange trading is all about.

The first mode is a single player game that allows users to get accustomed to the game itself, and understand the basics of Forex. Second, the game offers the chance to play against live players using live Forex fluctuations. Finally, there is a mode which allows gamers to influence the behavior of exchange rate within the game.

The project is currently gathering funding, and the game is in a testing phase. Many users on the test servers are logging in regularly, playing, and purchasing currency to play in the game. The team views current lovers of skill-based games as their target market, as this segment of game population is growing by as much as 30% each year. Most current skill based games, however, focus on arcade games, card games, and fantasy sports, which makes Forex-battle unique in this niche.

Currently, Forex-battle works on all OS platforms, and has specialized applications available on several social media platforms, with more under development. The project is available in English, Russian, Chinese and Thai. Cash is accepted in most online currencies, and can be paid out in Paypal, Webmoney, Money, Yandex, meaning that users around the world will have access to financial incentives.

Forex-battle is currently accepting investments through FundedByMe, offering investors a variety of benefits, including:
-Profit participating, estimated to be more than 400% of the initial investment,
-participation at shareholder meetings,
-opportunity to act as an adviser for crucial decisions,
-right to participate in other business activities.

About the lead team
Grigory Chepcov has 15 years of experience in Internet businesses. In 2005, he introduced the ColumbOS project to the Russian Internet, which was revolutionary in its time. Ideas from that project were later incorporated in Chromium and FireFoxOS.

Lina Zaharova joined the team with 8 years of experience in programming, the vast majority of that in designing Front End systems. She spent 5 years with Accenture, gaining a unique understanding of technical concerns that she is delighted to bring to Forex-battle.

For more information on this funding opportunity, visit the funding website. 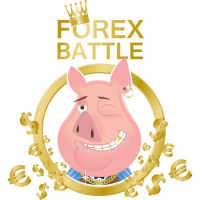