The new discount code has been launched to celebrate the success of the new solar power charger, which has become one of the most recommended new products on Amazon. It takes the product down from $42.85 to one dollar.

New York, NY -- (ReleaseWire) -- 09/02/2016 --CARVAJALbros has today announced they have launched a new discount code that will take their Solar Power Charger from $42.85 down to one dollar. The discount code has been launched to celebrate the success of the phone charger, which uses natural energy to charge mobile devices.

The new discount code, which is available by visiting http://carvajalbros.com/?page_id=132 is only available for four days. It was launched as a way for CARVAJALbros to thank their customers for making their new solar power charger one of the most recommended of 2016.

A spokesman for CARVAJALbros explained: "This is a once in a lifetime offer, which will never be repeated. We wanted to find a way to thank all of our customers for making our solar power charger such a huge success, and this discount code seemed the most fitting way of saying thank you."

The Solar Phone Charger 500 mAH, has been described as the best solar power charger on the market. It has 2 USB ports, which means it can charge two devices at the same time, and with the energy being generated by the sun, it means the user can charge their devices no matter where they are.

The designers of the solar power charger have come up with a product that is stylish and lighter than most mobile phones. It provides a solution to charge multiple devices including mobile phones, cameras, and IPads. It is the perfect charger to use outdoors for camping, hiking, and sports activities. There is no need to worry about accidental damage; it is shockproof and dustproof as well as being water resistance, providing the consumer with a product that will stand the test of time.

- EXPLORE AND ENJOY WHAT NATURE GIVES YOU! The most portable charger that exists, not even you will note that you are wearing it. Easy to carry, water resistant, shockproof and dustproof. Weighs less than your cell phone. The hook is included.

- YOU WILL NOT HURT THE PLANET! You are defending ecology, use the best energy source we have, solar power, while recharging up to two devices at the same time with the two USB ports that brings.

- WHEREVER YOU GO, YOUR CHARGE WILL BE ASSURED! You are choosing the best solar charger, with the latest technology, with high capacity and efficiency. You can charge your phone up to twice thanks to its 5000 mAh battery.

- BRING YOUR OWN SUN IN THE DARK! You will never be dark with the illumination offered by the LED flashlight.

- ENJOY YOUR MUSIC AND STAY CONNECTED TO THE WORLD! As you do your activities the sun will provide enough energy to recharge your battery. Note that it is more efficient with wall connection.

To learn more about the CARVAJALbros solar charger and to take advantage of the special discount code that makes the solar charger available for one dollar, please visit http://carvajalbros.com/?page_id=132

About CARVAJALbros Solar Charger
The solar charger has received five-star reviews from consumers. With it using natural light to charge devices, it means it can charge a device in any location. 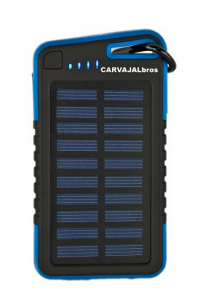