Oslo, Norway -- (ReleaseWire) -- 06/24/2014 --The Norwegian label Enjoy Music with singer and musician Ablai, just released ”We’re Making History”, a groovy up beat party song for soccer fans around the world. The inspiration behind the song is children in the Brazilian favelas who dream of a better life through soccer.

The artist Ablai, a 59 year old musician who built his first guitar with brake cables from a bike, came to Norway in the 70s from Gambia. He has been playing in the shadow of other stars ever since.

The songwriters and co-producers are two brothers in Norway named Arvin and Rune Johannessen. They also directed the music video which feature children playing soccer in one of Rio de Janeiro’s favelas. The head music producer is Christian Thomassen who is based in Oslo.

With lyrics like;” I see a child, a team, one love, one dream” Enjoy Music wishes to give back to the children of Brazil by donating 10% of the earnings to charity. 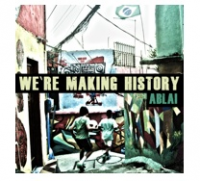