Part of its popularity is the accessibility inherently built into the game: Creators of the table-top game Kitty Kitty Meow Meow have devised a unique experience that takes just minutes to learn and yet lasts a good hour or so between 2-6 players. And while the subject matter seems cute enough to appeal to kids and cat-lovers, it's not particularly reserved for them. In fact, with its bevy of action cards, ten-sided dice, and unique rules, the kitty cats prove to be a novelty, a fun distraction at best, for a game that's incredibly fast-paced and strategic. As they'll soon discover, players are likely to engage in quite heated rounds, trying, plotting and planning, as a cat would, to steal from other players in the game.

The beauty and accessibility of this game begin with the ease of rules. Every Kitty Kitty Meow Meow deck, which includes 108 cards – made up for 54 "Kitty" cards, 38 Action cards, 15 Advantage cards, and 1 Sleepy Time card – comes with a set of "Game" and Kitty Clash instructions. Players each receive three cards, with the rest piled between as cards to be drawn. This is called the "Clowder". Based on the cards they draw, players can follow the instructions on the card or save their cards, trying to give themselves an "Advantage". The whole point is to steal kitties from other players while saving your own kitties because the player at the end of the game with the most kitties wins. Now, how does one end the game? That would be the playing of the "Sleepy Time" card -- because that's what cats do best.

The creators of Kitty Kitty Meow Meow have already triggered production and the Kickstarter campaign is designed to place a concrete number of units for production. To help players get even more out of the game, the team behind Kitty Kitty Meow Meow are introducing collector packs, the second tier of backing at USD $100, as well as an opportunity to feature a custom-chosen cat as one of the faces on the standard deck. This is at the sixth level of pledging, at USD $250. 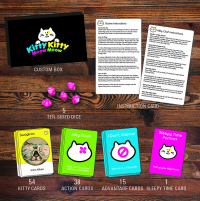