Los Angeles, CA -- (ReleaseWire) -- 05/04/2016 --There is a satirical web series making waves online in the heat of the American presidential elections.

It is witty, well paced, successfully crosses over between two cultures and continents and incredibly well-timed to be a major hit in the dramatic 2016 American presidential elections season.

"I first thought of the series four years ago but felt there are people out there who would actually believe a show like this is factually correct," says director Ose Oyamendan, a Nigerian-American, Hollywood-based filmmaker who is a graduate of the film program at the University of Southern California, Los Angeles and used to work in the center of American politics on Capitol Hills in Washington DC.

"We decided since Obama is not running for office again, we should go for it. Interestingly, our lead detective is called Donald John. And, you know who the other Donald John is? Yes, Donald J. Trump!"

In the series, Detective Donald John (Jason Corder), America's #1 right wing private detective goes to Kenya to dig out all of Obama's Kenyan secrets. He arrives in Nairobi full of Southern swagger, self-righteousness, and right-wing scorn.

"I liked the intense satirical take on the absurdity of the idea that Obama is not actually American. It's also an extremely funny script, funnier than any I've had the pleasure to work on yet in my career," says the series' star, Corder, who is also the star of STAY, one of Kenya's top television series.

Detective Donald John's sidekick is Amani Gitau (Mugambi Nthiga – Nairobi Half Life, Lost In Africa), a former police detective who is down on his luck. They comb through Nairobi, falling for one scam artist after the other in a hilarious series that touches on and knocks off all stereotypes.

"I love a good satire. Especially one that's as timely and hilariously audacious as 'Oh-Bama', says Nthiga. "Playing Amani was fun. All I needed was to read the logline to be all in. I had worked with Ose previously at Ogilvy Africa. He was partially responsible for some of Airtel's most popular campaigns in Africa. This wasn't a project I wanted to say no to."

The series was filmed in Nairobi, with a couple of scenes filmed in Los Angeles. It also stars some of Africa's leading stars like Nini Wacera (The White Masai; Desperate Housewives of Africa); Chichi Seii (Sense8) and one Africa's top models, Ajuma Nesanyana.

"My Character is such a sleek, sly snake. I thought of the endless con men stories that float around Nairobi," says Seii, the self-styled Africa's number one female detective.

"I imagined myself to be one of those clever tricksters who can smell their prey even before the poor idiot has spotted them."

All the episodes can be viewed exclusively on Youtube via the Oh-BAMA page at http://www.oseoyamendan.com.

The series trailer can be viewed at https://www.youtube.com/watch?v=7dTbPzKb6wE. 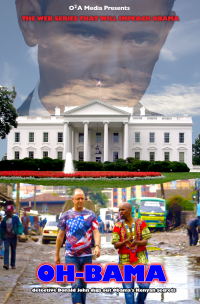