Editor of Nile Magazine has put together five things about Ancient Egypt that most people may not know.

According to Jeff, many people believe that the camel was always the main form of transport in Ancient Egypt. However, it was donkeys and boats that were mainly used to transport people and goods. It was in 525 B.C. when Egyptians started to see camels on a regular basis as this was the time when the Persians who occupied Egypt at the time brought camels with them.

Another important fact that Jeff wanted to share with people who are interested in Ancient Egypt is that women had equal rights with men. According to the editor of Nile Magazine (www.nilemagazine.com.au/about-nile/), which is available to purchase online from around the world, men and women had the same social standing and were treated as equals. In terms of the world standing in equal rights, Ancient Egypt was far more advanced than most of the other countries around the world. Women could earn their own money; they could also inherit property, and they dealt with family business matters when the husband was absent.

One surprising fact that was shared by the editor of Nile Magazine regards make-up. According to Jeff, men and women both wore make-up, which they believed gave them the protection of the gods Horus and Ra.

Jeff Burzacott from Nile Magazine said: "There are a lot of false facts that appear on the Internet and by reading our magazine, we not only bring you great articles and wonderful pictures, we also bring you facts about Ancient Egypt."

Nile Magazine has been described as one of the most interesting magazines of 2016, as well as being one of the most colorful. The publication, which comes out each month, is available on subscription.

To learn more about one of the most exciting magazines on Egypt, please visit http://www.nilemagazine.com.au 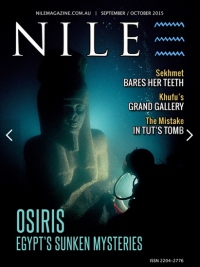