Los Angeles, CA -- (ReleaseWire) -- 05/17/2016 --New Musicals Inc. (in cooperation with 3-D Theatricals) is thrilled to announce the cast for the upcoming staged reading of the new musical Invisible, with book by David Hollingsworth and lyrics and music by David Orris.

Invisible was developed through NMI's curriculum; was presented at the STAGES Festival in the summer of 2015; and won NMI's annual SEARCH for New Musicals this year. This concert reading will be co-directed by 3-D Theatrical's Artistic Director T.J. Dawson and NMI's Artistic Director Elise Dewsberry; with music direction by Ron Barnett; sound design by Julie Ferrin; and puppet design by Patricio Wolovich.

The cast is set to include Michael Thomas Grant (For the Record: Dear John Hughes, UMPO: Clueless, UMPO: Scream) and Daniel Amerman (Arrested Development, The Office, Glee, CSI:NY, Awkward, and the ABC Family prank show "Freak Out") as the high school nerds, Griff and Kemper who brew up a potion intended to make them popular (but which accidentally turns Griff invisible). Ashley Argota (The Fosters, Girl Meets World, True Jackson, VP, The Lion King on Broadway) is the goth girl, Hemlock; and Jordan Goodsell (Frozen: Live at the Hyperion) is the jock Chetwick. The cast is rounded out with Christie Brooke and Natalie MacDonald as the twins Melrose and Madison Lindeborne; Jay Cramer as Principal Sherman; Luke Klipp as Mr. Reeves, and Luke Matthew Simon and Daniel Mills as the flunkies Craig and Jackal.

About Invisible
Invisible is a John-Hughes-esque musical theatre re-interpretation of the HG Wells classic The Invisible Man with a totally original pop/rock score that takes great joy in paying homage to popular music and popular cultural tropes of the era. The show ultimately endeavors to physically and figuratively bring the audience into their own hallowed high school hallways via the heightened and dangerous halls of Springborough High School. Invisible lives in the fairly self-concerned and narcissistic year of 1988, because at its core, it is a show about what it means to cut away all of the cultural and social melodrama and truly see another human being. 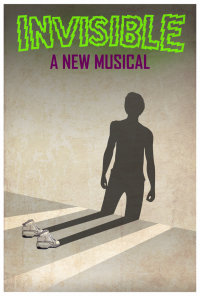