The archaeologist states, "Two of the lithic objects retrieved from the monumental wood structure or Area A comprise very unique artifacts. The first artifact is made of pumice, a lightweight volcanic stone. This artifact was found on the surface in Area A and exhibits a rectangular carving on one side of the object. Another faint incision appears on the opposite side of the artifact. Observed from an angle, the object exhibits two eye-like impressions and a nose. This anthropomorphic face design resembles other artifacts at Epipaleolithic and Neolithic sites—several on the edges of grinding stones. Anthropomorphic figurines are rare in Epipaleolithic assemblages and this artifact is one of very few carved from pumice. The other carving comprising a basalt figure, less than ten centimeters in length, resembles a foot or claw. This artifact was found in Locus 4 with other ceramic votive objects from later periods."

Klenck concludes, "The figures associated with the monumental wood structure on Mount Ararat are important because they reveal artistic expressions at a prehistoric site with mostly utilitarian features such as storage areas, habitations, and small installations—several with animal dung." 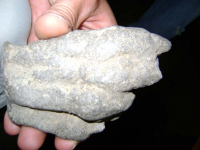 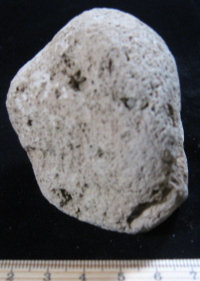 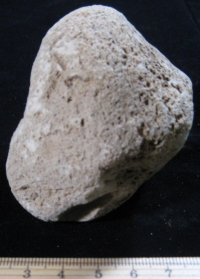