Normal People Scare Me Too, a Film About Autism Gets Rave Reviews

Los Angeles, CA -- (ReleaseWire) -- 05/16/2016 --Normal People Scare Me Too, a film about autism was inspired by the past and driven the future. A decade after the award-winning film Normal People Scare Me was released, Taylor Cross, the film's co-creator, is at it again in this sequel film. In the new Normal, Cross interviews former and new cast – and in some cases moms who speak for and support their limited or non-verbal children - about attitudes and first-person perspectives in autism today. The documentary, which is driven by Cross' offbeat, quirky charm, is directed and co-produced by Keri Bowers (Cross' mom,) and produced by Joey Travolta.

"In 2006, when Taylor was 15, I gave him a cameraman and an editor but said you have to do all the work. You have to interview the clients and get the clients to make this film." says Travolta of his arrangement with the mom and son duo. "This time around, Taylor turns me into the client, by turning the camera on my work in autism." The film crew for the new production was comprised of 75% autistic students and graduates of Travolta's Inclusion Films, a practical film school for adults with disabilities which grew out of the original movie. The music, art, and animation was created and/or performed by 65% autistic musicians, composers and artists. "Taylor's vision to make these films has, by extension, impacted countless people all over the world."

Asking questions such as "What's hard for you?" "What are you really good at?" "What do you want educators, parents and others to know about autism?" and of course, "Do normal people scare you?", in Normal People Scare Me Too, Taylor draws out significant insights and opinions while introducing us to a vibrant cast of characters. A decade ago, most of the film's subjects were clear that "normal" was scary. We've come a long way since then with answers that will surely amaze and make us re-evaluate the way we perceive so-called "normal" today.

As times have changed on the autism landscape, so too have the concerns surrounding the growing numbers in autism. In 2006, the numbers were 1 in 166. Today, according to The Centers for Disease Control, the numbers are 1 in 68 – though by some estimates, are as high as 1 in 45. "With major concerns and slow efforts to effectively deal with futures and jobs creation, as a global society, we need to create more opportunities to address and access those needs for millions of people aging out into adulthood." says Bowers, adding, "In addition to seeing possibilities for futures in our casts stories, we worked hard to be an inclusive team behind the scenes. It was important to us that the new Normal represent a more inclusive production, providing opportunities to build resumes, jobs and potential careers for our creative team. We're very proud of that. In a very real sense, the future is now."

WHAT PEOPLE ARE SAYING ABOUT THE NEW "NORMAL"

"Without diverse thinking, perhaps we'd all be 'normal;' ordinary, common, average, and unremarkable. Normal People Scare Me Too shines a light on something more – a perspective sorely needed in this world. Bravo!" Maripat Robison, author "I Married a Geek"

"Normal People Scare Me Too is a fascinating and deep exposé into living on the autism spectrum. A must see for anyone wanting to know more about the trials, triumphs, and dreams of people on the spectrum, the viewer comes away with a profound and greater sense of what it means to be human." Dr. Stephen Mark Shore, author, speaker, clinical assistant professor Adelphi University

"As soon as I started watching, I could not stop! NPSMT digs deep into the minds, feelings, insights and perceptions of autistic people. This film will surely ignite hope and optimism for many. You must see this film!" Barry M. Prizant, Ph.D., author "Uniquely Human", CCC-SLP. Director: Childhood Communication Services Adjunct Professor: Center for the Study of Human Development

"You did it again! This film brings out the vital voices of people on the autism spectrum, and lets the world see their individual truths." Elaine Hall, The Miracle Project, author "Now I See the Moon" and Seven Keys to Unlock Autism"

For more information about the project visit www.normalfilms.com. 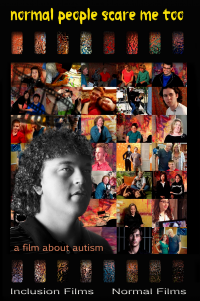