Gold River, CA -- (ReleaseWire) -- 05/16/2017 --The Oakland Strokes finished their season with fast racing and multiple medals at the Southwest Youth Rowing Championship. Held at Lake Natoma near Folsom, this regatta draws high school participants from California and beyond, including as far as Arizona and Utah. The 2017 edition of the regatta hosted 38 clubs in 36 events in 3 days. It also serves as the qualification regatta for the National Youth Championship in Sarasota, Florida on June 9-11. The top 3 winners for the Varsity and Lightweight Men's and Women's events earn an invitation to compete at National Youth Championship Regatta.

The Lightweight Women's Eight led the way with a dominating performance, storming home to win their event by 9 seconds! That victory sends them to Youth Nationals along with the bronze medalist Women's Quad. The entire Women's Varsity squad had a great weekend, winning gold in the Second Varsity and Third Varsity Eights. The Fourth Varsity Eight won an unofficial championship by finishing as the top Fourth Varsity in the Third Varsity event.

The Women's Novice squad ended their season strongly, winning gold in the Novice 4+ event. The Novice Eight added a hard fought bronze medal. The squad showed their depth by placing crews into the Grand Finals in all of the events in which they competed, a rare feat at this tough regatta.

The Oakland Strokes rowing club welcomes middle and high school students from across the Bay Area. Nationally recognized college coaches seek our rowers based on the strength of our community and our passion for instilling the best values of rowing. Our goal is to build character and commitment by providing youth rowing for students of all backgrounds the opportunity to be a part of the team. Oakland Strokes offers summer learn-to-row camps for middle and high school students.

More information can be found at http://www.OaklandStrokes.org. 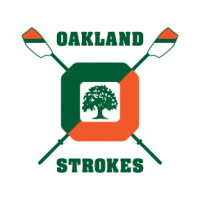