Cambridge, Cambridgeshire -- (ReleaseWire) --02/10/2012 --There are over 100,000 hotel rooms across London, but already it can be hard to find a hotel room at a reasonable rate during the Olympics. These inflated prices may put off tourists who aren’t coming just for the games.

UK tourism minister John Penrose said: “The principal trap is that potential domestic and foreign visitors who aren’t avid sporting fans can be put off visiting an entire country for the whole of an Olympic year.”

Despite evidence that some hotels have increased their July rates from less than £100 to nearly £200 (€120 to €240), VisitBritain’s David Leslie insisted prices “pretty much reflect” what would be usually charged in London during peak season.

Shadow minister for London and the Olympics Tessa Jowell claimed prices across London were averaging an increase of 315%, as she called for action "on behalf of those already struggling families across the UK who want to be able to afford to come to London and enjoy the Olympic and Paralympic Games".

Speaking during Commons Culture, Olympics, Media and Sport questions, Ms Jowell cited the case of a woman from Exeter who, she said, was having to pay £1,000 a night for a room with a hoist to be able to take her disabled daughter to the Paralympics, a room for which at Easter she was paying £375 - a 167% increase in price

Not all the fault can be put on the hotels however. Hotel groups are complaining that the discounted rooms they have provided to Olympics organisers are being resold at massively inflated rates.

There are still many rooms to be found, particularly now that the Olympic games commitee to cancel a reservation fo 120,000 hotel rooms. A quick search on HotelSweep.co.uk, a hotel search engine that searches hotels directly rather than just travel agents like Expedia, returned a guest house in Acton with rooms from £24 and a hotel in Victoria with rooms from £34 during the games. 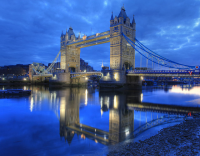