OMBEE Is Now Accepting Preorders on Most Versatile Standing Desk

Santa Monica, CA -- (ReleaseWire) -- 02/08/2016 --California based Startup OMBEE has announced that it is now accepting pre-orders at 50% off the retail price on its versatile and functional standing desk. OMBEE launched their crowdfunding campaign today on INDIEGOGO and you can find their campaign here.

Standing desks have been increasing in popularity over the past several years as research, spearheaded by an endocrinologist with the Mayo Clinic named Jason Levine, has shown that the amount of sitting done in offices contributes to a host of health concerns, such as obesity and cancer. Unfortunately, experts in ergonomics have dismissed many standing desks as not flexible enough for most people; you need your hands to remain level to your elbows, but your eyes to be focused straight forward to get the best and healthiest body posture.

Standing desks can also be difficult to incorporate in business environments because they can be expensive, awkward, and challenging to install in a way that is beneficial to all employees.

The fifteen benefits of the OMBEE standing desk speak directly to these problems. The desk folds up into a case, making it easy for freelancers to set up in different environments. It assembles in about two minutes, meaning that you don't spend half your day creating and then disassembling your desk. The desk is constructed from a honeycomb material that only weighs around 10-14 lbs (depending on accessories) yet is impact and heat resistant. Height is adjustable, making the desk comfortable from people who are around 4'5" up to 6'4". And the desk comes with anti-fatigue mats that help keep legs and knees strong and comfortable.

Back in September 2015, OMBEE participated in San Francisco's TechCrunch Disrupt conference to rave reviews. OMBEE stands for Office Mobile Bee, and its president is Omar Noorzai. If you're interested in how the OMBEE desk might fit into your workspace, you can check out the company's VIMEO to see ease of setup, or Instagram to see the various ways it can be put together. The company says that it will introduce accessories such as cell phone holders and rolling cases in Q4 2016. Reviewers have called the desk "awesome," said that "people love it", and suggested that this is a great alternative to traditionally expensive office furniture.

For more information about OMBEE, to sign up for the newsletter, or to preorder, go to the company's website at http://www.ombee.com. 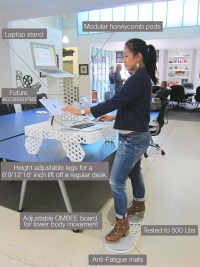