Raleigh, NC -- (ReleaseWire) -- 11/09/2017 --CryptoTrust has announced this month the launch of a revolutionary universal encryption device that will enable secure communication for everyone and will work virtually anywhere. It is called OnlyKey Quantum, and its future-ready framework will build cryptocurrency support. Plus, it will be the first commercially-available, post-quantum crypto device.

OnlyKey is a physical device carried on the user's person on a quick disconnect keychain. Available with cases colored Stealth Black, Guardian Blue, Resistance Red, Hacker Green or Quantum White, OnlyKey is waterproof, durable and about the size of a house key.

By using a physical device to communicate securely and manage passwords, Onlykey can ensure security even if a computer or device is hacked.

"When our team first started building OnlyKey, security and openness were top priorities. In order to use OnlyKey to log in, physical touch is required. In order to read a secure message, physical touch is required. This protects your data even if the connected computer has been compromised as malware can't physically touch anything. Our design is open source so that it can be validated that there are no backdoors. This just isn't possible with other closed source products." CryptoTrust Founder, Tim Steiner.

Unlike other physical devices (smartcards and tokens) with complicated setup, OnlyKey works directly in Google Chrome and Firefox browsers with no software to install. Available on Kickstarter from $40, OnlyKey Quantum builds on the successful 2016 Kickstarter during which CryptoTrust launched OnlyKey, the "perfect combination of security and convenience" for passwords and two-factor authentication.

As a two-factor authentication and password solution, OnlyKey works anywhere a keyboard works and is the most universally supported password manager on the market. It can be used to enter a computer's password to unlock it and to store and enter the password for any software or website. OnlyKey stores account information offline, so the only way to access it is to physically press a button on the OnlyKey.

To make sending an encrypted message even easier, OnlyKey works with Keybase for identity verification. Users can store their public key on Keybase, a new and free security app which verifies the identity of the person to whom the message is being sent. With Keybase, users can look each other up using their Facebook or Twitter username to send a secure message.

In addition to not being complicated like smart cards and tokens, Onlykey also has additional security benefits. Instead of unlocking the device by typing a pin code on the keyboard where it can be intercepted, the OnlyKey pin code is entered on the device itself, offline. For messages, OnlyKey requires a confirmation code to be entered on the device. So unlike smart cards and tokens, if OnlyKey is left plugged into a compromised computer, the messages are secure. This user presence prevents hackers, intelligence agencies or malware from accessing encrypted messages or impersonating a user.

"OnlyKey is the perfect combination of security and convenience, serving to manage passwords and make online communication secure."

OnlyKey is currently available and CryptoTrust has launched OnlyKey Quantum on Kickstarter to raise funds for developing a desktop app, a web app that will support on-the-go encryption, a Chrome extension, Android app, and more. They have plans to implement post-quantum crypto functionality as well as Ethereum and Bitcoin functionality when they reach their stretch goals of $50,000 and $120,000, respectively.

To find out more or purchase an OnlyKey Quantum, visit the Kickstarter page here: https://www.kickstarter.com/projects/1048259057/onlykey-quantum-future-ready-encryption-for-everyo 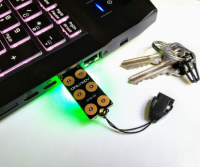