Greenville, NC -- (ReleaseWire) --11/11/2011 --F. Joel Fodrie, Assistant Professor at the UNC Institute of Marine Sciences, is leading our next discussion Opening the Oyster of Tomorrow: Oyster Reef Restoration in Coastal North Carolina on November 14th from 6:00 PM until 7:30 PM at McCurdy's Restaurant on Atlantic Beach, NC.

Dr. Joel Fodrie is an Assistant Professor of fisheries oceanography and ecology at the University of North Carolina at Chapel Hill, where he studies the population dynamics of fishes and shellfish. Dr. Fodrie works along all three major U.S. coastlines, examining: 1) how the dispersal of marine organisms connects populations and affects overall fishery productivity; 2) how food-web interactions within estuarine communities can be used inform ecosystem-based management; 3) how to maximize the ecosystem services resulting from restoration of biogenetic habitats (i.e., seagrasses, oyster reefs); and, 4) how harvest pressure and climate variability have influenced the long-term population trends of fishery species (using multi-decade data sets).

Dr. Fodrie earned his Ph.D. in Oceanography from the Scripps Institution of Oceanography (2006; University of California, San Diego) and was a post-doctoral researcher at the Dauphin Island Sea Lab (Dauphin Island, Alabama) before moving back to North Carolina – where he was raised and attended school as an undergraduate - in the summer of 2009. He has contributed 20 peer-reviewed articles that explore mechanisms of population variability for fishery species. These articles appear in journals such as Proceedings of the National Academy of Sciences, Ecology, and Limnology & Oceanography. 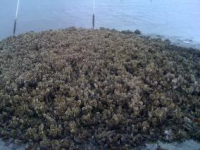