Oakland, CA -- (ReleaseWire) -- 05/01/2018 --Oracle Arena, home of the defending NBA Champion Golden State Warriors, has received a much-needed roof cleaning, just in time for the team's deep 2018 playoff run. The restoration, provided by Pacific Exterior, has improved the appearance of the stadium for a better visual during blimp coverage on broadcast television.

The roof—subjected to extreme weathering and pollution from nearby Highway 880, as well as organic staining from algae, bacteria and lichen—previously had a dark, filthy appearance. After treatment by Pacific Exterior, it now enjoys a like-new appearance, perfect for aerial coverage of the Golden State Warriors' current series against the New Orleans Pelicans and upcoming NBA Conference Finals.

After vetting service providers throughout Northern California, the project was awarded to Pacific Exterior, based on its merits and ability to handle large-scale work with unique parameters and requirements. The company was personally recommended by Bob Fitzgerald, Golden State Warriors television play-by-play announcer and host of Fitz and Brooks on KNBR Radio.

"Pacific Exterior did an incredible job cleaning my clay tile roof. They were professional, on time, very thorough and I would recommend them for any and all cleaning situations. I'm extremely pleased with their work," recounts Fitzgerald.

Pacific Exterior has gained a reputation for solving complex issues of organic growth and staining on exterior building surfaces—including various commercial facilities throughout the Bay Area. The company has developed non-invasive, safe wash cleaning techniques and products that do not cause damage to exterior surfaces.

"In the case of Oracle Arena, the structure has an acrylic 'cool roof' coating that absolutely cannot be damaged," said Eric Schnaible, Owner of Pacific Exterior. "Power washing just isn't an option and is, in fact, against the recommendation of the manufacturer and the arena's engineering department because high pressure could cause damage. Our safe wash method was a natural fit for the job. The before and after pictures speak volumes about its effectiveness!"

The company also touts an emphasis on eco-friendly washing solutions, particularly those involving little-to-no water waste. Where power washing the arena would've wasted a tremendous amount of water—in addition to damaging the coating—Pacific Exterior was able to complete the job safely, with outstanding results, using a fraction of the water. The company was also able to responsibly reclaim 100% of the detergent and rinse water used to complete the project.

For more information about Pacific Exterior and its safe washing capabilities, please visit the company's website at https://www.pacificexterior.com/.

About Pacific Exterior
Pacific Exterior is a pioneer of non-pressure exterior cleaning and restoration methods. Since 2010, the company has provided its services to residential and commercial buildings throughout Santa Cruz and all of Northern California. It uses environmentally-safe, detergent-based cleaning methods to deliver immaculate results, without damaging property. Pacific Exterior is a founding member of the National Soft Wash Alliance and affiliated with the United Association of Mobile Contract Cleaners and certified by the Roof Cleaning Institute of America. 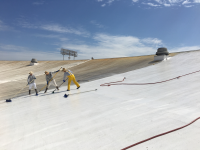 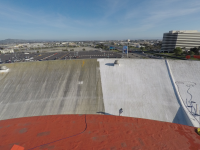