American Consumers to Fight Global Warming with Their Wallets

A new group calling itself Consumer’s Action for Sustainable Palm Oil is urging Americans to fight global warming and wildlife extinction by supporting their push for the responsible use of sustainably produced palm oil products.

Seattle, WA -- (ReleaseWire) -- 02/22/2013 --Palm oil provides the majority of the world's vegetable oil and generates valuable revenue for the developing countries where it is grown. Trade value is US $50 billion a year for a commodity that goes into about half the products on supermarket shelves in the US including everything from cosmetics to cookies just to name a few.

Its impact on the environment is considered one of the leading contributors to global warming. It’s production is dramatically escalating the destruction of critically endangered animals in Malaysia and Indonesia which produce over 85% of the world’s palm oil.Both countries have been criticised by many environmental groups and leading scientists for their lack of environmentally sound practises in expanding palm oil plantations. The most iconic victim of the palm oil industry is the orangutan, one of the four great apes whose big soulful eyes have reached the hearts of millions worldwide.

Awareness of the destruction behind palm oil however is relatively unknown in the US compared to Europe where anti palm oil groups have called for its boycott for years. The campaign at Consumers Action for Sustainable Palm Oil (CASPO) aims to change that and have rolled out a series of campaigns recently.

- Legislative Action The most daring one is a call for legislative action to restrict the importation of palm oil into the US. Lead campaigner LeAnn Fox puts it bluntly as “.Americans must not be used as unwitting partners in causing global warming when they are fed unsustainable palm oil nor can we be part of the problem of wildlife extinction and animal cruelty" Her campaign is directed to U.S. Senator Maria Cantwell who has authored a bill to protect great apes in US laboratories. According to Ms. Fox, the Great Apes Protection Act should cover not just great apes used in laboratories in the US but should also include those that are being harmed by industrial palm oil plantations. As the industry spreads to Africa, more great apes including unique subspecies Nigerian-Cameroon chimpanzees, the Drill and Preuss Red Colobus are being threatened with extinction as well.

Nick Thompson, CEO of New Britain Palm Oil, had these harsh words for Greenpalm Certificates “Although we understand the theory behind Greenpalm certificate trading we have always thought that because the associated claim of sustainability is so weak, the value to any buyer would be correspondingly low and therefore represent too little incentive to the growers.” This is exactly what has been happening and they now pretty much represent the price you pay for doing nothing and turning a blind eye! The value of certificates is negligible and the fact that such a massive percentage of Greenpalm Certificates are being redeemed by a very small number of companies demonstrates an utter lack of corporate responsibility.

Greenpalm certificates just get in the way of traceable efficient and sustainable supply chains evolving in our opinion. That's what the end consumer eventually wants and so Greenpalm is now an obstacle to a more sustainable industry rather than an aid.”

American companies including Kellogg’s are still using Greenpalm Certificates as a sustainability cover of their use of palm oil. Kellogg’s is being taken to task by Consumers Action for Sustainable Palm Oil in a letter writing campaign titled “ Kellogg’s. Stop the greenwash and use sustainable palm oil now!” This campaign is led by 17 year old Jason DeGrauwe from St Paul, Minnesota who has long led a push for deforestation free products and lifestyles

More shocking than the use of Greenpalm Certificates is the total lack of a policy on palm oil use among some major US corporations including Starbucks coffee. In their social media campaign, the group is challenging all Starbucks customers to help shape a policy on palm oil use by Starbucks. “ As one of the more socially and environmentally conscious American brands, we find it disappointing that Starbucks does not even have a policy on palm oil use. Even their own investors acknowledge that palm oil has a devastating effect on global warming and are calling for a policy on it. As Starbucks customers, we are the ultimate bosses and we must let them know how we feel about palm oil use. Yum! Brands which runs Taco Bell, Pizza Hut and Kentucky Fried Chicken have a similar predicament in front of them and we’re hoping that a strong policy from Starbucks will point the direction for all American brands” stated CASPO.

Note to editors. Consumer’s Action for Sustainable Palm Oil is made up of concerned citizens from all walks of life the world over who have volunteered their time to the cause. We are not scientists nor professional environmentalists. We may be few with limited resources but we will speak out against the destruction caused by palm oil and we welcome others to join us and seek positive change. 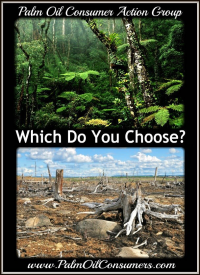