PaperShooters™ announces the much anticipated launch of their website to coincide with their innovative product’s first production run. Designed for gaming enthusiasts, the self assembled cardboard rifle fires ‘soft splat’ paper ammo accurately up to a distance of 75 feet!

Manchester, UK -- (ReleaseWire) -- 01/12/2015 --Paper pellets make great projectiles- just ask any kid. On 30th January, PaperShooters™ launches their highly innovative build-it-yourself cardboard blaster! They blast 100% biodegradable 'soft splat' ammo, which hit and stick to targets up to 75 feet away. The shooters are more accurate than other blasters, and unlike foam darts, you don't need to retrieve your ammo afterwards. You make it yourself, in seconds, using ordinary paper! They feature awesome interchangeable camo's which you can design yourself, real triggers, and ejecting shells. Fully customizable blasters to keep modders happy too. Using ultra safe paper ammo PaperShooters™ is much more child friendly than Airsoft or Paintball but more realistic than Nerf. PaperShooters™ kits are suitable for all ages 8+. The product is designed to get online gamers back into reality and outdoors with other players, PaperShooters™ are celebrating two milestones in the journey to launch their innovative paper shooting cardboard assault rifle. The company is opening their website and the first production run is underway. PaperShooters.com will commence pre-orders for the 'gunsmith experience' on January 30th. To start with a bang, pardon the pun, they will run a ten day countdown beginning on January 20th. Participants of the countdown have the chance to win free merchandise and one lucky PaperShooters™ fan will win up to $10,000!

Not stopping there, via eBay, PaperShooters™ will auction the first 100 kits ever produced. Adding to the fun of the moment, the auction will start with kit number 100 and tick down to the first ever kit produced. The collector's item auction, including a signed authentication from designer and manufacturer is set to begin on February 1st.

Launching initially with the ultra- cool Zombie Slayer camo, subsequent designs include 'Digital Ops' and the 'Golden Touch'. A limited edition gold plated version will also be available. Each model kit comes with all the tools needed to build a working blaster- priced between $35 and $49 each PaperShooters™ kit is fully equipped for personalization and modding.

PaperShooters™ cardboard rifles will come with a supporting Clan App to further enhance the experience. This enables gamers to set-up, coordinate and even communicate during campaigns, track kills, achieve badges and gain ranks using a wrist-mounted smartphone. It will even map the distance covered during operations. If you enjoy building things, and shooting things, you will love PaperShooters™

About PaperShooters™ Limited
PaperShooters™ Limited is a UK-based company that holds the proprietary designs for the PaperShooters™ model kit that enables a customer to build a cardboard rifle. Designed for gaming enthusiasts, the blaster shoots paper pellets up to 75 feet from a loaded magazine. PaperShooters™ is the brainchild of 30-year-old designer Mike Howarth working in collaboration with former Nerf engineers.

PaperShooters™: BUILD IT! MASTER IT! 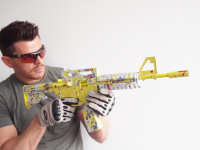 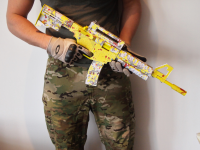