Pastor Kenneth Sharpton-Glasgow Is Shocked, but Well Pleased with the DOJ

Vincent, AL -- (ReleaseWire) -- 12/11/2020 --On December 9, 2020, The United States Department of Justice filed suit against The Alabama Department of Corrections and The State Of Alabama. The factual basis of the suit alleges that the conditions in Alabama's prisons are unconstitutional because the state fails to provide adequate protection from prisoner-on-prisoner violence and sexual abuse. The complaint goes on to claim that the state fails to provide safe and sanitary conditions, and subjects prisoners to excessive force at the hands of prison staff. Pastor Kenneth Sharpton-Glasgow says that he is "shocked, but well pleased that the DOJ is finally taking action."

In the early morning hours of December 10, 2020, Author and Criminal Justice Advocate Kelly Patrick Riggs, called Pastor Sharpton-Glasgow for his thoughts about the rampant physical and sexual abuse of prisoners in the custody of The Alabama Department of Corrections. Although the conversation started out as a friendly discussion, both Riggs and Sharpton-Glasgow discovered that they shared similar passions for the incarcerated people of America.

Although both men are well known for advocating for the rights of prisoners, Pastor Sharpton-Glasgow is best known as the founder of The Ordinary People's Society (TOPS). The Ordinary People's Society is a motivated faith-based national nonprofit organization that was founded in 1994. The organization, under the guidance of Pastor Sharpton-Glasgow, offers hope and provides a continuum of unconditional acceptance and care to individuals and their families who suffer the effects of Mass Incarceration.

Pastor Sharpton-Glasgow has provided personal guidance to many returning prisoners. He has listened to the shocking accounts of prisoners who have been both physically and sexually abused in the Alabama prisons and has vigilantly raised concerns about this travesty for over two decades.

To learn more about The Ordinary People's Society, visit https://www.wearetops.org.

About Kelly Patrick Riggs
Kelly Patrick Riggs is a prolific author who turned criminal justice reform advocate. He promotes the theory that recidivism and crime can and should be fought with opportunity. He is the author of How To Write Your Own Check, the step by step guide to making a living by writing. 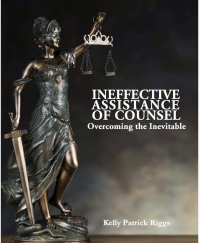