Group summits Kilimanjaro on October 1, 2017 via the 7-day Lemosho Route

Sun Valley, ID -- (ReleaseWire) -- 12/05/2017 --Climbing the tallest mountain in Africa is not your average adventure. In fact, it can be life changing. On October 1, 2017, Patryce Hodges, Blaze Bhence, and Diana Bosetti of Cypress, California, summited Mount Kilimanjaro (19,340 feet / 5,895 meters) via the 7-day Lemosho Route (http://adventureswithinreach.com/tanzania/kilimanjaro/overview.php?trip=7-day-Lemosho-Route). Mt. Kilimanjaro, located three degrees south of the equator in northeastern Tanzania, is the tallest mountain in Africa and the highest freestanding mountain in the world.

All the trekking routes on Kilimanjaro are non-technical and can be accomplished by anyone in reasonably good physical condition. "Kilimanjaro is our hottest destination," says Robin Paschall, owner of Adventures Within Reach. "Of the famous 'Seven Summits,' Kili is the easiest to get to and to climb. Most people add a cultural tour like a safari and some choose to enhance their experience by choosing our luxury trek option. But no matter how one does it, climbing Mt. Kilimanjaro is truly a trip of a lifetime."

Bhence told Adventures Within Reach that two years ago, he had been diagnosed with stage 4 renal cancer and given six months to live. He had surgery in October 2015 and two years after that surgery, will attempt to summit Mt. Kilimanjaro. He said of climbing Kili, "Bucket lists take on a whole new meaning when you look death in the face. Friends get you through amazing situations."

Hodges explained her decision to do a Kilimanjaro trek this way. About 4 years ago, Hodges decided to become physically fit, and lost 80-plus pounds. She started running and hiking. With one of her hiking partners, Hodges hiked Mt. Baldy numerous times throughout the last two years and successfully summited Mt. Whitney last October after her father passed away. She said that, "summiting Mt. Whitney so close after losing one of my most favorite people made the summit even more special, and I was hooked." Hodges was interested in climbing Mt. Kilimanjaro, but she had no one to go with, that is, until a church friend asked her to go with her out of the blue.

Following their climb, the group embarked on a 7-Day Tanzania Safari (http://adventureswithinreach.com/tanzania/safari/itinerary.php?trip=7-day-Tanzania-Safari), which took them to Tanzania's best areas for wildlife viewing. They visited Tarangire, a beautiful park filled with Baobabs and Acacias with a large variety of game such as zebras, elephants, giraffes, and waterbuck, the Ngorongoro crater, which is abundant with wild game including elephants, rhinos, cheetahs, lions, leopards, and hyenas, and the Serengeti, Tanzania's most famous and largest national park and one of the most spectacular parks in the world. The "endless plains" of the Serengeti cover some 14,763 square kilometers including large plains, short grass plains, kopjes, and lakes.

Bhence is also looking forward to venturing into the Serengeti to search for amazing wildlife. He says thanks to "my family, my friends, UCLA Medical, Dr. Chamie, and many others who made this possible."

Hodges thanks her husband for his support, her hiking partner for his friendship and encouragement, and her friend and her husband for allowing her to share this special time. 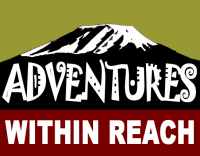 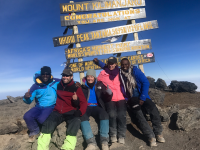