BarberaCares and State Rep. Solomon are working together to fundraise for the Trinity Oxford Church in Lawndale to re-establish a PAL center at the historic location as well as their mutual safety campaign for Roosevelt Boulevard "Don't Text and Drive, Slow Down Phone Down".

Gary Barbera says, "When Jared Solomon calls, I always answer. He's a true politician for the people. He is truly a dedicated person who sincerely cares about everyone in his district. He works hard for every single person in a neighborhood that is a melting pot of cultures. His whole team works day and night for the betterment of our community."

It's BarberaCares privilege to help this hard-working family to give them a break from their financial challenges during the Christmas season. Gary Barbera says, "There is a reason for the season and Christmas is the time to reflect on our very own blessings. Christmas should be magical for children." 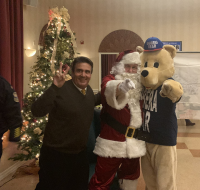