In his debut novel, author Wayne Abrahamson draws on his rich experiences in the US Navy to write an exciting nautical fiction adventure that follows protagonist Joseph Havok.

Regina Sakalarios-Rogers, Ph.D., Instructor & Intern Coordinator for the University of West Florida's English Department says, "There's treasure and seaplanes and sinister foes on a forgotten island. Sunken ships. Innocent people in danger. Oh, and an unconventionally dashing hero. Everything the genre demands for a good time. This is a book for those rainy afternoons or sunny beach days when you have the time to be carried away."

Havok has no idea of the troubles he'll face when he and his business partner go off in search of a lost cache of WWII silver near an island in the South China Sea. The two men travel by dive boat to Terumbu Island, unaware of the others they will soon encounter, including an American CIA station chief, an environmental-studies professor, and the captain of the professor's research vessel. But Terumbu holds other secrets, something far more dangerous and much more valuable than the island's cache of old silver.

Abrahamson's writing is greatly inspired from his experiences as a sailor. "I spent 24 years in the US Navy traveling the world. My travels have written so many novels in my head. Cold San Miguel Beer in the Philippines. Hot bullets searing the desert night sky in Iraq. In between, words filled a curious mind. Now it is time for others to read my mind. Black Silver is a story of my experiences in the Orient as a young sailor. Readers of my novel will witness, firsthand, the lively imagination of a young sailor while on the China Station."

Abrahamson is slated to release another fiction novel with Indigo River Publishing in 2022. His debut novel Black Silver is now available on Amazon and major book retailers.

About Wayne Abrahamson: Wayne Abrahamson, originally from Elroy, Wisconsin, spent twenty-four years in the US Navy, serving aboard a number of vessels, including destroyers and the elite Special Boat Squadrons. While in the Navy, he qualified as a private pilot, parachute jumper, and divemaster (PADI). After retiring from service, he qualified as a master scuba diver (NAUI) and earned several undergraduate and graduate degrees in anthropology and history. Abrahamson is now an adjunct college instructor in Pensacola, Florida, and spends his free time traveling to the Caribbean and Latin America. While his first novel, Black Silver, is based on his previous experiences in the South China Sea and Southeast Asia, he now uses his travels to the Caribbean and Latin America as inspirations for future writing projects, to include action-adventure novels and works of historical fiction. 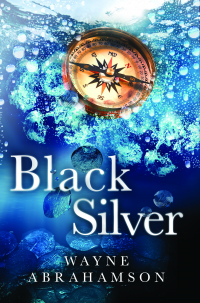