The Aussie Ice Chest Cooler allows users to stay seated while others get their food or drink from the cooler. Creator Peter Scott is looking to raise $450,000 AUD via Kickstarter for the initial production run of this patent pending cooler.

Brisbane, Australia -- (ReleaseWire) -- 06/06/2016 --Peter Scott has a long tradition of delivering consumer-centric products that make people's lives easier. Over the last four decades, he has owned and operated several successful businesses. Peter's latest venture is the Aussie Ice Chest Cooler, an innovatively designed product that will relieve the users from having to get up to retrieve drinks or food.

Interestingly, Peter came up with the idea of this patent pending cooler for this personal requirement. "Ever since I came up with this concept of the Ice chest cooler due to my wife constantly asking me to stand up from the cooler at a BBQ to get a drink or food, I dreamt that night of a cooler with side opening bins so I could stay seated, I then made a prototype and showed it to several friends that encouraged me to go ahead with the concept as they would buy one off me," he states.

The most important features of the Aussie Ice Chest Cooler are

- The side opening bins on both sides of the cooler allow access to drinks and food from either side of the cooler.
- Keeps food and drinks cooler for longer durations compared to the traditional top-opening coolers.
- Commercial Grade UV Treatment
- Food Grade Interior
- Two wheels for easy transportation.
- Built in Bluetooth Stereo Speakers

Over the last ten years, Peter has built an excellent relationship with his manufacturer. He has also designed the packaging material. His two distribution centers will be based in Brisbane and Los Angles USA. However, unfortunately, Peter needs to raise $450,000 AUD to start the initial production run of the Aussie Ice Chest Cooler. A Kickstarter campaign has been launched recently to raise this amount. All proceeds from this campaign will cover the production and final assembly costs of the Ice Chest Cooler.

To find out more about this campaign, please visit http://kck.st/1szVb3g 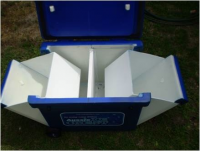 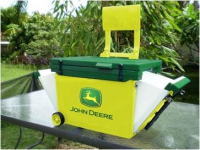