phati’tude Literary Magazine Is Available for Sale on Amazon.com

phati'tude is a great multicultural magazine that showcases emerging and established poets and writers from around the world that serves as a platform where readers can discover writers from their communities.

New York, NY -- (ReleaseWire) -- 05/18/2011 --phati'tude Literary Magazine is proud to announce the release of its latest issue, “CELEBRATING BLACK HISTORY THROUGH LITERATURE: From the Harlem Renaissance to Today.” A publication of the Intercultural Alliance of Artists & Scholars, Inc. (IAAS), phati’tude is the only literary magazine aimed at bringing multicultural literature to a general audience.

Gabrielle David, editor-in-chief, notes “I am always looking for ways to promote different types of literature and felt this was the perfect time to do an African American Issue. There haven’t been many African American anthologies published recently, so this definitely filled a void. Also, there has been a lot of chatter regarding the validity of African American literature in a “post-racial” society, so it was important to celebrate the genre, as we know it. CELEBRATING BLACK HISTORY THROUGH LITERATURE is historical in that it brings together a group of distinguished African American writers alongside emerging writers in one issue. I have no doubt that this issue will become an important teaching tool in the years to come.”

In its appeal to a general, educated, literary-inclined audience, the IAAS has recently instituted a promotional campaign to distinguish phati’tude from other literary publications. Readers can follow-up and access information on writers on the web, in bookstores and at live readings. phati’tude is a great way for readers, as well as students, to develop an appreciation and understanding of all aspects of literature from writers of diverse cultural backgrounds. 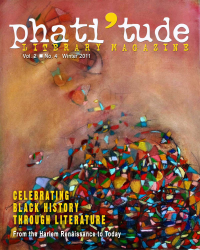