New York, NY -- (ReleaseWire) -- 10/20/2011 --The attacks on 9/11 irrevocably reshaped the face of our nation. Ten years later we at phati’tude would like to present an exclusive take on the events that were to change American history forever. While politics plays an important role in the social inquiry into the aftermath of this event, as a literary publication, we decided to highlight how various communities were affected by 9/11 through literature and the arts. BRIDGING THE CULTURAL DIVIDE provides a rare platform for works written in the immediate aftermath of 9/11 and writings on the permanent socio-cultural effects of the events. Furthermore, the issue aims to present a well-rounded and illuminating perspective which features the works of Arab American, Israeli, Jewish, Muslim and Afghan American writers.

The largest issue phati’tude Literary Magazine has produced to date, this 280 page investigation into 9/11 and its cultural aftermath features sixty poets, five major interviews, three features, fifteen essays, the work of four artists, and four short stories from writers around the world of diverse cultural backgrounds. In an attempt to “bridge the cultural divide,” the works, by both emergent and established authors, collectively present stories of historical, personal and cultural change, which inform, entertain and inspire.

BRIDGING THE CULTURAL DIVIDE also offers a wealth of essays and interviews including exclusive conversations with writers and scholars Ammiel Alcalay, D.H. Melhem, Hayan Charara, Karen Alkalay-Gut, and Zohra Saed. These poets enter into insightful discussions concerning the importance of preserving the role of poet as witness, historian and social activist to further an art that matters.

The essays featured in this issue include works by eminent scholars in their respective fields, including Lisa Suhair Majar, Ranen Omer-Sherman, Zohra Saed and Sahar Muradi, Bassam K. Frangieh, and Morris Dickstein. The essayists are invested in a scholarly inquiry into the nature of individual and authorial identity and engage the reader, and each other, in an intellectual debate that cultivates critical and creative thought.

BRIDGING THE CULTURAL DIVIDE also includes the sections “First Impressions,” “Lasting Impressions,” and “Artist As Witness” which examine the ways in which worldviews have altered and developed from the initial shock of the event to reactions to its long-term socio-political and cultural effects. With such a wealth of interesting viewpoints which intersect and collide, phati’tude Literary Magazine’s Fall 2011 issue “BRIDGING THE CULTURAL DIVIDE: Remembering September 11th” is a veritable tapestry of voices which ecstatically connect to and echo one another other.

The cover artwork, “Hope” is by artist Linda Puiatti, with additional artwork by Ryan Seslow and Ernest Williamson, III.

BRIDGING THE CULTURAL DIVIDE is available for sale at Amazon.com for $20. Check out previews at http://phatitude.org/online/phatitude-magazine/issues/.

About phati'tude Literary Magazine
A publication of the Intercultural Alliance of Artists & Scholars, Inc. (IAAS), phati’tude Literary Magazine, established in 1997, distinguishes itself as a multicultural publication that appeals to a general, literary-inclined audience. The magazine’s mission is to support the literary and visual arts as tools of empowerment, education and liberation for future generations as individuals and as a community. Help support our efforts and purchase our publications today on Amazon.com. (www.theiaas.org) 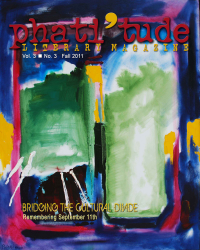