PhoneDown.com Offers a Challenge to Set Down the Smartphone and Pick Up a Life

Responding to the mania surrounding smartphone usage PhoneDown.com provides a community to support those brave enough to just say no.

London, ON -- (ReleaseWire) -- 08/05/2014 --When studies can show that participants would rather give themselves a shock of electricity than sit and enjoy the simple life there’s something wrong. There’s no doubt about it, sensation seeking is a global addiction. While smartphones seem like a brilliant idea in support of the god of multi-tasking they’ve also become a liability. So says a new web mobile app called PhoneDown.com.

The PhoneDown mobile app gives users every reason to unplug from the busyness associated with keeping a smartphone at arm’s reach. The responsible approach to social networking, the app gives users a time stamp to prove they officially stepped away from the cell phone. The timestamp is attached to a photo of what they did instead and, a time clock that counts how long they did it.

Aaron Lindsay, founder of PhoneDown.com said of the app launch, “I’m guilty of loving my smartphone too much, I’ll admit it. I’ve text while driving and there’s no good excuse for that. With this mobile app I’ve taken that horrible habit and made a community out of changing it. Now fellow users of PhoneDown can post their pictures on the site, along with their timestamps, to prove that they’ve done something other than be on their phone. It’s at least a step in the right direction. I just want us to remember to be human again.”

About PhoneDown.com
PhoneDown.com is a mobile web app designed to encourage users to put their phone down and enjoy simple activities like family time, friends, exercise, eating or favorite pastimes. The app also acts as an accountability tool to keep users off the phone while driving. 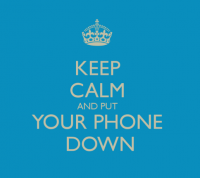