Paradiso, Switzerland -- (ReleaseWire) -- 08/19/2014 --Russell Chapman is a freelance photographer who spent a month in Syria last year covering the violence in that country. He also visited Syrian refugee camps in Jordan and Lebanon and was impressed and surprised by the warmth of the people despite the hardships they were suffering. After his trip, Chapman published a book of photographs called “Refugees and Rebels” and talked about his experiences during international conferences at Franklin University in Switzerland, Oxford University in England and the Conference of Forced Migration in Washington, D.C.

Now he wants to return to Syria to document a side of this situation which has received less attention, the way in which Syrian refugees in Jordan are rebuilding their lives.

The campaign will remain open for donations through September 24, 2014.

Huge numbers of Syrians are now refugees in Turkey, Lebanon and Jordan. The United Nations has registered more than 600,000 refugees in Jordan. The majority of them live in urban areas in the north of Jordan and the rest are in refugee camps. The Jordan refugee camp Za’tari is the second largest refugee camp in the world. The Syrian civil war has had a dramatic impact upon Northern Jordan because it started right across the border. At the start of this conflict many Syrians went to live with relatives in Jordan; but, as the trouble escalated, thousands of Syrians without relatives in Jordan began to go there for help.

Russell Chapman wants to return to Jordan to gather photos and other material for a second book documenting “Syrian Refugees: The Human Story”, how they are finding ways to rebuild their lives. He plans to donate 20% of all profits from the book and sale of photographic works to buy medicine for the Syrian refugees. Many cannot afford the medicines they need, especially for the children, so this project will provide direct benefit to those who need it.

Chapman has stayed in contact with many of the refugees he met on the first trip. He plans to follow up with them as well as meet with new Syrians to see how their lives have changed in the last year. Most photographers find an opportunity such as he had last year to be a “one and done” situation. Russell Chapman is in a position to document the next step, give a voice to those who have suffered so much. New crises seem to arise throughout the world every day. Nearly half the Syrian population has been displaced.

“Syrian Refugees: the Human Story” seeks to bring a different narrative to the problem, one that shows the humanity of ordinary Syrians and demonstrates how, with the right help, they can rebuild their lives.

In addition to publication of the book, the photographer plans to schedule a series of exhibitions in the United States and Europe similar to the ones he arranged following his first trip. Some of those photos can be seen in the gallery on the campaign site.

For complete information about Russell Chapman’s project to complete the second half of his documentation of the lives and hopes of Syrian refugees in Jordan, go to https://www.indiegogo.com/projects/syrian-refugees-rebuilding-their-future 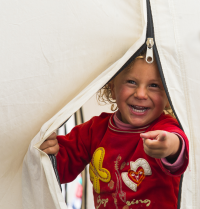