The newly launched ultimate cross-platform artillery and strategy game ‘Martial Towers’ is a winner-takes-all trek poised to make its players king. In this free-to-play title, impregnable castles protect their kings against virtual or human opponents in campaigns and real-time PvP battles. This cartoon-style physics shooter crosses platforms for real-time fun on iOS and Android smartphones and tablets.

Munich, Germany -- (ReleaseWire) -- 08/03/2016 --Ever wanted to be a king? A king who defends his or her castle against artificial intelligence or other players in real time battles across iOS, Android and Fire devices? Welcome to "Martial Towers."

It's a simulation game with a huge arsenal of upgradeable weapons used solely to flatten the castles of opposing forces. Sounds intimidating, right? Only if fast-moving battles that require a good strategy and expert slingshot precisions are daunting. If not, this cartoon-style romp to domination is just what a cross-platform battle game should be.

Cross-Platform Fun For Smartphone And Tablet

The game was designed to synchronize not only with other iOS or Android devices but cross-platform. In this way, players' "Martial Towers" data is available any time, anywhere. Kings can play on an iPhone during the day and then on an Android in the evening without experiencing a glitch in game play.

This cross-platform game allows players worldwide to join the fun in real-time or turn-based battles, irrespective of their device. Single battles take minutes, but conquering the leaderboard requires a very determined king. Gold, diamonds and power-ups are given as daily bonuses to reward active kings in this addictive free game as well as awards and recognition. What more could a king ask for?

"With no need to build clans or do other complicated tasks, players can start a game by simply entering a battle," said Higgs Games GmbH CEO Joerg-Dieter Leinert. "With every new level they can upgrade their fortress and their weapons to attack the weakest point of enemy castles. Attacks are counteracted with cannons, catapults and magic — when these weapons are cleverly used, even stronger opponents can be defeated."

Kings can download 'Martial Towers' for iOS at goo.gl/cNHaKn, for Android at goo.gl/8M99dC and for Amazon Fire at goo.gl/Tmo9zs.

Being a personified artillery strategy game, Martial Towers players build their castles out of hundreds of combinations, equip them with defenses galore, and then blast their opponents before their fortresses are blown to bits. Sounds simple, but it isn't. Due to the increasing difficulty, the game is entertaining for a long time and ensures permanent motivation among amateur lords.

The 36 single-player campaigns are suggested to give a player the chance to test new battle tactics, improve skills and earn gold for castle and weaponry upgrades. After all, these are level-based campaign missions against progressively stronger enemies. Speed is important, too — imagine using one weapon while secondary weapons are reloaded. Martial Towers is an immersive game world with PvP action rewarded in survival and a top position in the leaderboard other kings crave.

For more information on the game, visit www.martial-towers.com.

About Higgs Games GmbH
Higgs Games GmbH is the publisher of Martial Towers. The artillery game was developed by Independent Arts Software. Created with the benefit of partners in Japan, the United States and Europe, the game was released on a small scale internationally to get real customer feedback, helping further optimize the game. Martial Towers is available in 13 languages for Apple iOS, Google Android and Amazon Fire."

A press kit with a reviewer's guide, app store descriptions and screenshots about this remarkable game can be found at www.higgs-games.com/press and on Dropbox at goo.gl/kAScEA. 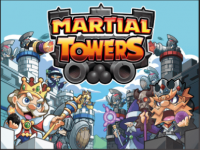