Picking Up Awards and Laughs Worldwide, "Our Scripted Life" Now Hits Amazon Prime Video in the US and UK

Premiered at the TCL Chinese Theater two weeks before COVID-19 hit the US, "Our Scripted Life” helps flatten the curve by offering a good laugh online.

Palm Beach, FL -- (ReleaseWire) -- 05/26/2020 --Writer, producer, and director David Towner's newest film "Our Scripted Life" makes its way to Amazon Prime Video US and UK. Taking his comedy cues from greats like Monty Python, the Coen brothers, and the Farrelly brothers, with a bait and switch take on love, the one-to-watch filmmaker brings a universal blend of funny to the table. A veritable romp through the unexpected, the indie film stars Abby Wathen, Ryan Karloff, Pat Germano, and Melissia Gary. They bring to life a story about a daytime TV actor named Jake who's in love with his co-star, Anna. Hoping to take her mind off of her engagement to Chad, a fellow soap star, the film takes Jake to a big lie he never dreamed existed. Mix in colorful family members, a combat veteran squirrel, and a local mobster looking for loan repayment for the film's production and complications abound. Especially when Anna, the British aristocratic femme fatale, shows Jake her real truth in a rural Kentucky "holler."

Towner said of the romantic comedy's success, "When we first submitted the film, we won seven awards in the first four festivals. That sweep included two Best Comedy Feature awards, Best Feature Film, Best Lead Actress, Best Actor, Best Musical Score, and Best Supporting Actor. We were beside ourselves when we realized that was just the beginning; the reception since then has been phenomenal as well. Comedies usually get snubbed by festivals so, I'm extremely grateful."

One viewer raved, "A well-thought-out comedy!! Does a complete 180 in the middle, which is perhaps, funnier than the first part. An avenue one would never see coming."

To view the movie on Amazon Prime, visit https://amzn.to/3cYbYEQ. 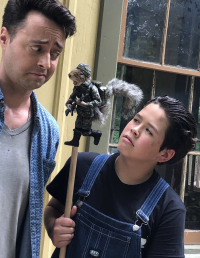