Plus a New Chamber Arrangement of “The Rite of Spring”

New York, NY -- (ReleaseWire) -- 03/26/2013 --The Pit Stop Players, a thirteen-member instrumental ensemble composed of veteran Broadway pit musicians, will conclude their fourth season with special guest Cynthia Nixon narrating a new work, plus a newly commissioned chamber arrangement of Igor Stravinsky’s towering masterpiece, “The Rite of Spring.” The concert will take place on Monday, May 6, 2013 at 8:00 pm at Peter Norton Symphony Space, 2537 Broadway at 95th Street, New York City. Tickets range from $20-$35 and can be purchased online at Symphony Space Events or (212) 864-5400.

“I heard Cynthia’s voice in my head as I was writing this piece, and I’m thrilled and honored that she agreed to narrate it in its world premiere,” Rosenblum said. “Our ‘Young Person’s Guide’ is a tour through our unusual instrumentation and the wide-ranging styles we play in, like contemporary classical, jazz, rock, and film music, as well as combinations thereof. Just as Britten’s famous piece embellishes a theme by another British composer, Henry Purcell, I’ve created a set of variations on a memorable Broadway tune. You’ll have to come to the concert to hear which one.”

The Pit Stop Players will also present a new chamber orchestration of “The Rite of Spring,” created especially for this concert. Each movement has been re-orchestrated by a different prominent New York composer/arranger.

“We’ve got Broadway veteran Eric Stern, Encores conductor Rob Berman, Whit Stillman’s go-to film composer Mark Suozzo, and Emmy Award-winning arranger Jamie Lawrence, among others, re-working the piece expressly for our instrumentation,” Rosenblum said. “I’ve wanted to conduct this sensational piece ever since I was a kid, and since this is its 100th anniversary year, it seemed like the right time.”

The concert will also include Mikhail Ippolitov-Ivanov’s “Procession of the Sardar,” William Bolcom’s “Poltergeist,” and Alberto Ginastera’s “Danzas Argentinas.”

Cynthia Nixon appeared on Broadway most recently in “Wit,” for which she was nominated for a Tony Award. She won the Tony Award for Best Actress in the Pulitzer Prize-winning “Rabbit Hole,” and also received Drama League and Outer Critics Circle nominations. Her other Broadway credits include “The Women,” “Indiscretions” (Tony Award nomination), “The Heidi Chronicles,” “Angels in America,” and “Philadelphia Story,” as well as “Hurlyburly” and “The Real Thing,” in which she appeared simultaneously. Off Broadway, she has starred in “Distracted,” “The Prime of Miss Jean Brodie,” and “Lydie Breeze.” Her television credits include “World Without End,” “The Big C,” “Too Big To Fail,” “Warm Springs” (Emmy, Golden Globe and SAG Award nominations), “Tanner and Tanner,” and “Sex and The City,” for which she won the first of her two Emmy Awards, two SAG Awards for Best Ensemble in a Comedy Series, and was nominated for four Golden Globes and two additional Emmys. Films include “Rampart,” “Sex and The City: The Movie,” “Sex and The City 2,” “An Englishman in New York,” “Lymelife,” “The Babysitters,” and “Little Manhattan.”

Composer, conductor and pianist Joshua Rosenblum has led the orchestras for thirteen Broadway and Off Broadway shows, including “Wonderful Town,” “Chitty Chitty Bang Bang,” “The Music Man,” “Miss Saigon,” and “Dr. Seuss’s How the Grinch Stole Christmas”. He is also the composer/creator of BUSH IS BAD, the hit Off Broadway satirical revue, and the composer/co-lyricist of “Fermat’s Last Tango,” “Einstein’s Dreams,” “Garbo and Me,” and the forthcoming “The Haunted Hotel.” His instrumental music has been recorded on two CDs: “Impetuosities” and “Sundry Notes,” both on the Albany Records label. Rosenblum has written pieces on commission for Philip Smith, principal trumpeter of the New York Philharmonic; Ethel, America’s premiere post-classical string quartet; and the Chase Brock Experience dance troupe, among many others. He teaches Composing for Musical Theater at Yale University, his alma mater, and was recently awarded a grant from the Signature Theatre in Washington, D.C., as part of the American Musical Voices Project: The Next Generation.

About The Pit Stop Players
The Pit Stop Players is a crossover ensemble for contemporary music, comprised of some of New York’s top freelance musicians, many of whom normally spend their evenings playing in Broadway pit orchestras. Founded by conductor/composer Joshua Rosenblum, the Pit Stop Players gives these musicians a chance to climb out of the pit and take center stage, performing a stimulating and eclectic assortment of music. Repertoire includes arrangements and transcriptions of great pieces from the recent past (encompassing numerous genres), but the primary emphasis is on new compositions that are both challenging and immediately engaging, written and orchestrated specifically for the group by today’s most exciting creative talents. Since their first concert in February 2010, the Players have performed works by Bernstein, Bartok, Ginastera, Stravinsky, John Psathas, William Bolcom, Peter Schickele, Danny Elfman, Lennon/McCartney and Freddy Mercury, among others, as well as world premiere compositions by Steven Burke, David Chesky, Gary William Friedman, Steve Kenyon, Jamie Lawrence, Julian Rosenblum, Josh Schmidt, Michael Starobin, and Fay Wang. Works that stretch or (even better) shatter the conventional boundaries between genres are especially encouraged. With their unique mission, exciting repertoire, and broad appeal, the Pit Stop Players have cemented their place at the cutting edge of New York’s cultural landscape. 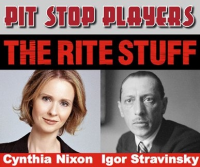