San Francisco, CA -- (ReleaseWire) -- 10/23/2014 --Platinum artist Gregory Abbott is known for his classic mega hit "Shake You Down" which blazed music charts around the globe.

For those not familiar with Abbott, his is a unique timeless blend of Pop/R&B with a splash of Caribbean. Indeed along with the loyal following of folks who love his brand of R&B Abbott's Spanish/Caribbean heritage draws a fresh new mix of fans in this multi-cultural age. He has always been a favorite for romance and "quiet storm" moments and his new single "Every Little Step" written and produced by Abbott does not disappoint.

A few years ago Abbott made the decision to release new music via digital singles in order to satisfy his numerous fans who are always writing in saying they miss his presence. He releases on his Mojo Man Entertainment label.

"Every Little Step" is a romantic and soulful song that expresses the sentiment that lasting love grows by steps…. little steps… which bring you closer and closer. A nice metaphor for love and life in general.

Pick it up. Definitely worth the buck.

About Gregory Abbott
Abbott released the single and album "Shake You Down" shaking up the music industry with countless honors and awards. Abbotts' music has gone to number one on charts all over the world. He's won first prize at the Tokyo Music Festival where his performance was broadcast to over two billion people. 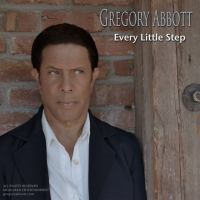