Poet Tony Medina has the distinction of being the first 2Leaf Press author to simultaneously publish a print and Kindle edition.

New York, NY -- (ReleaseWire) -- 07/22/2013 --2Leaf Press is pleased to announce the publication of poet, professor and activist Tony Medina’s latest poetry collection, BROKE BAROQUE, with a powerful introduction by MacArthur-winner, author, and Professor Emeritus at University of Berkeley, Ishmael Reed. BROKE BAROQUE is available for sale on Amazon.com and other online outlets.

With razor-sharp scatological whimsy, Medina’s iconic ironic existential every man — Broke — bears witness to the plight of homelessness from his curbside porch, torching the capitalist system and its myriad societal contradictions. In BROKE BAROQUE, the poetry is peppered with subtle images that talks about Broke’s existence and life experiences on the streets of “Any City” through tall tales, anecdotes, episodes, rants and jokes that eloquently convey his marginalization in an unaccommodating society.

By using humor and sardonic wit, Medina’s hopes BROKE BAROQUE will “get people to acknowledge the growing number of homeless men, women and children” that are multiplying in communities around the country, and take some kind of action. To learn more about BROKE BAROQUE directly from the author, readers can check out Medina’s book video on 2Leaf Press’ website and YouTube channel.

Medina has the distinction of being the first 2Leaf Press author to simultaneously publish a print and Kindle edition. The Kindle version is available as a KDP Select title, which allows Amazon Prime customers to borrow the book through Kindle Owners’ Lending Library. Amazon customers can download Kindle apps for smartphones, computers and tablets (such as iPod, Nook and Kobo). 2Leaf Press’ ebooks will be also be made available directly through Kobo and Nook once it completes its KDP Select program in the Fall 2013. Bookstores can order BROKE BAROQUE through 2Leaf Press’ 2LP Direct Distribution program, which can be found on its website.

With a stunning cover design by Miriam Ahmed that features a painting by Jean-Michel Basquiat, BROKE BAROQUE is a poetry collection to be devoured as a single sustained narrative, from the first page to the last; a worthy addition in anyone’s library.

ABOUT 2LEAF PRESS
2Leaf Press is an imprint of the Intercultural Alliance of Artists & Scholars, Inc. (IAAS), a New York-based 501(c)(3) nonprofit organization that promotes multicultural literature and literacy. 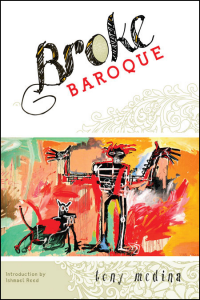