New York City, NY -- (ReleaseWire) -- 03/24/2020 --Covert Joy's debut single "Warning You" is the modern-day bad boy anthem with a message that says: "If you want to be with me, you've got to understand you're not the only one." Covert sings with a zealous playfulness that signals a straight-forward announcement of where he stands when it comes to relationships. The lyrics convey the situation of an open-hearted player who is just having fun with no strings attached. By giving a sincere warning, nothing can be misunderstood. The release date of "Warning You" is March 27th.

ABOUT COVERT JOY:
Boston, Massachusetts native, Covert Joy, is an exciting new emerging talent to the music scene. Being surrounded by music in the home during his early years, it's no surprise that this would be the career path and calling Covert fell into. As a child, his parents would consistently play the most popular songs from their era which eventually drew Covert Joy to fall in love with the harmonies. Once he started voice lessons in high school, it was clear that his passion and calling would be to pursue music full time. Perfecting his craft over time, the young artist's music can best be described as pop music with a Venn diagram into other genres such as soul, rock, and funk with a modern flair and twist.

With a work ethic like no other and natural talent, Covert Joy will continue to carve a path in the music scene and touch many with his sound. Covert Joy is making his mark in this pop-millennial era of music with his current visual release for "Warning You." Covert Joy is an artist on the rise. 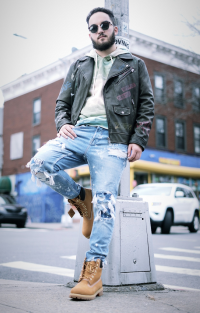