Shutta is a popular app that removes the problem of missing that moment when taking pictures with a mobile phone. It allows the user to take a still image from a video captured on the phone. The app that has revolutionized the way iPhone users take pictures with their devices will soon be available for Android devices.

Los Angeles, CA -- (ReleaseWire) -- 05/12/2016 --The app that makes sure people never miss that magical moment again by taking a high-quality still from a video has been hailed as one of the most important photography apps for mobile phone users. Shutta (http://www.shutta.co), which is hugely popular, but currently only available on iTunes (https://itunes.apple.com/app/shutta/id781540408?mt=8), has been downloaded close to half a million times in the last few months. At last it will also soon be available for Android users.

For many years, mobile phone users have suffered from the serious problem of missing a significant moment while trying to take a picture. Instead of missing that special moment or a fun thing a family member or a loved one did due to the phone not being fast enough to take the picture, the Shutta app allows the user to take a high-quality still from their video. That means mobile phone users can turn off their camera and switch on their video camera and choose which special moments they would like to turn into an image.

A spokesman for the clever app said: "Our app, which will soon be available for Android devices, allows the user to make quality stills from their videos. Instead of missing those important moments, they can choose the best image to turn into a picture from their video. These can then be downloaded straight to the phone, without losing any resolution"

The powerful app has changed the way people take pictures of sporting events such as football, snowboarding, basketball and F1 car racing. Trying to take a picture of a fast moving object or person can be a bit hit or miss with a mobile device. However, by using the Shutta app, the user can take the perfect picture each and every time.

Shutta is easy to use. The mobile phone user takes a video and then reviews the film and chooses which frame they would like to turn into a picture. They can then decide to keep that picture on their phone, share it on Facebook or other social networks, send it to a friend through an email or text message. Users can also submit their Shutta photos to photo contests, called Shutta Missions, to win any number of cool prizes.

The app has received rave reviews from gadget experts and users who have used the app for a various range of events including sporting events, concerts, and family events.

To learn more about Shutta and to download the app, please visit http://www.shutta.co

About Shutta
Shutta was first developed by James Shimell, a web and mobile app developer since 2008. The app allows users to turn their videos into images. A still can be taken from a video and turned into a photograph, without losing any resolution.

Media Contact:
For further information on Shutta, to receive an invite to the beta release, or to schedule an interview, please contact: James Shimell. 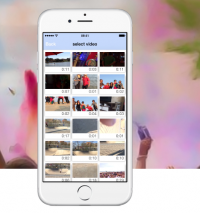