It is not unusual for divorcing couples to fight over assets.

Syracuse, NY -- (ReleaseWire) -- 07/07/2020 --But what about a $700 million art collection? One of the highest-profile divorces in New York history involved just such a treasure trove.

Real estate developer Harry Macklowe and his former wife, Linda Macklowe, divorced after nearly 60 years of marriage. Their divorce trial lasted more than 3 months. A key issue was the disposition of the couple's art collection

According to artnet, the includes "a $50 million Andy Warhol Marilyn, nine works by Pablo Picasso, [and] a Jackson Pollock painting worth up to $35 million."

In December 2018, Manhattan Supreme Court Justice Laura E. Drager ordered the Macklowes to sell the entire collection and split the profits equally. Drager's order came after the Macklowes could not even agree on the value of the collection. Each party produced its own expert appraisal, but their valuations differed by over $150 million.

A five-judge panel rejected Linda Macklowe's call to appoint a "neutral expert" to prepare a new valuation. The panel said this "would serve only to prolong this litigation between octogenarians."

On March 18, 2020, the art dealer Drager appointed to conduct the sale announced he would "pause the process" of conducting the auction. Receiver Michael Findlay said due to the COVID-19 pandemic, he was not prepared to select an auction house at this time. According to artnet, the Macklowe sale may not go forward until May 2020 at the earliest.

Syracuse, New York, family law attorney Richard J. Bombardo said there are lessons in this case, even for couples who do not own one of the world's largest art collections.

"New York follows an equitable distribution rule in divorce cases. This means that a court need not divide assets on a 50-50 basis. Instead, a judge will look at a variety of factors and circumstances.

"In the Macklowe case, Judge Drager decided there was no fair way to divide the collection.

So she ordered an outright sale. This was further complicated by the Macklowes' inability to agree on the collection's value. Such disagreements often arise in high-asset divorces. But it is generally in both parties' interest to agree upon a valuation rather than engage in protracted litigation. This case provides a cautionary tale on this subject." 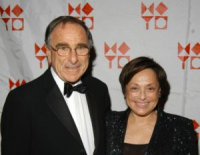