Camarillo, CA -- (ReleaseWire) -- 11/03/2016 --SPL Systems has been a provider of top level audio services for over 20 years Owner Bill Forbes says that while the company once handled retail and installation as part of their business, they grew to focus exclusively on live sound. As a result, Forbes and his team spend a lot of time transporting gear to jobs that can range from state fairs to corporate events. Looking to overhaul their amplifier rig in pursuit of superior audio performance, next generation DSP and networking, and a more compact amplifier rig, SPL Systems turned to industry-leading power amplifier manufacturer Powersoft and their X and K Series amplifiers.

Tough Decision, Easy Choice
Forbes's decision to overhaul the SPL Systems amplifier inventory was not made lightly. "I'm a very cautious buyer and it took a lot for me to pull the trigger and make the switch," he says. "I wanted more power with less weight and I also wanted get into the 21st century as far as DSP and networking technology. Everyone in the industry I talked to about it said Powersoft was the best choice to address those needs." Forbes purchased a package of two K20 amplifiers, five X4 amplifiers, and two X8 amplifiers, a system he knew would be well equipped to drive his EAW speaker system. Fitting all of the amps into only two racks, he had slimmed down his rig while powering up his output.

Multi-Tool Player
Since the changeover in June of this year, Forbes has been harnessing the power of Powersoft's Armonía software to get the most out of his new amplifiers. "What's great about Armonía is that I can change any amp to any role on the fly, so my racks aren't limited to just one use," he says. "I used to have a specific rack for monitors, one for my KF 730 speakers, one for my KF 740 speakers, and so on. Now I've just got my two racks and I can designate any amp for any task on the fly through the DSP platform." Forbes also harnesses the power of Armonía's presets, which provide optimal settings for his EAW speakers, as well as other manufacturers. "Powersoft always has the most up-to-date presets from EAW, so I simply load them onto my amplifiers and I'm good to go," he says. "They also have great libraries for other manufacturers, which is good to know because if I ever rent out my amp racks I know the user will find whatever presets they need."

Lightening the Load
Everywhere Forbes goes with his Powersoft racks he's carrying far less weight than ever before, making trucking much more manageable. "The power density I can achieve with Powersoft's single and dual-rack space amps is amazing," he says. "I don't have to worry about getting pulled over at weigh stations on the way to one of the fairs we work and having the trucks be over weight. And I can handle a lot of these events with just one of the Powersoft racks, saving around 600 lbs of amplifier weight compared to the old system."

One such recent event was the Eastern State Exposition—or "Big E"—in West Springfield, Massachusetts. "It's one of the top attended fairs in the country and this year we used one of the Powersoft racks on the Code of Honor stage," he says. Forbes used the amps to run twelve EAW KS 730s and six SB1000 subs, plus microwedge monitors and front fills. "They sound phenomenal, really above and beyond in clarity," he notes. "It's as good as I've ever heard my speakers sound. We had some great engineers come in with a variety of different bands and they were all really pleased with the sonic performance.

Fairground Tough
Reliability has been a shining quality of the new Powersoft amps already. "I've been putting these amps through their paces this summer as far as heat and general environmental nastiness and they don't let up," Forbes says. "With all the outdoor fairs we're in the dirt, the dust, the rain, and the humidity, pretty torturous conditions for an amplifier, and these things are just loving it." Forbes has also tested their capacity for handling low-resistive loads. "I've purposely loaded them down to 2 ohms to see how they'd handle it and they make it look easy. I didn't have a single issue with the amps all summer; it was a real breathe of fresh air."

Welcome Change
While it wasn't an easy decision for Forbes to overhaul his amplifier stock, he knows he made the right choice with Powersoft, and Powersoft's excellent support has made the transition as easy and seamless as possible. "The support has been great," he says. "Any question I've had has been answered promptly and thoroughly, but to be honest the product has been really easy to navigate on my own. The interfaces all make sense, which is important for somebody like me who doesn't like to read manuals!" While winter is a slower season for SPL Systems as outdoor events wind down in the Northeast, Forbes is already looking forward to hitting the ground running in the spring with his new rig. "I can't wait to get the Powersoft rig out again and take it through its paces."

About Powersoft
Powersoft is the world leader in lightweight, high power, single rack space, energy efficient amplifiers for the professional audio market. Founded in Italy in 1995, headquartered in Florence, Italy, with offices in Camarillo, CA, Powersoft couples the experience and precision of its production department with exceptional components to deliver products with perfect audio response and high performance reliability. Its state-of-the-art amplifiers can be found in an array of markets, ranging from stadiums, sporting arenas, theme parks, performance venues and airports to convention centres, churches and clubs, and are used by the world's leading tour sound companies. 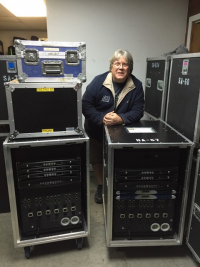