While the Obama Avenue petition gives something for Obama enthusiasts and Trump protesters alike to rally behind, it might not honor our forty-fourth president properly.

Alpharetta, GA -- (ReleaseWire) -- 09/03/2019 --Alpharetta, GA (August 30, 2019) – Clearly, New York City is not a fan of President Trump. A petition calling for the stretch between 56th and 57th Streets on Fifth Avenue to be renamed President Barack H. Obama Avenue, in honor of former President Obama and protest of President Trump, is now up to over 445,000 signatures.

The petition to rename the street after Obama originally began as a joke, as Fifth Avenue is the same street where Trump Tower resides. Many supporters of the petition seem to be more enthusiastic about the street being renamed because of the message it would send to President Trump rather than how it can pay tribute to former President Obama.

The book The Forty-Fourth: A Perspective on the Odyssey of President Barack Obama (2008–2016) with Reflections on Lincoln Parallels by Alice Rhodes Hinsley, EdD, celebrates the forty-fourth president's many accomplishments during his eight years in office. The book is a timely companion to the current events surrounding Obama Avenue and serves as a more positive way to acknowledge the accomplishments of the forty-fourth president's leadership without deprecating the current president.

"I am thrilled at the possibility of streets or schools being named after a magnificent president like Obama," says Dr. Rhodes Hinsley. "However, I hope those signing the petition would do it primarily to honor Obama's legacy and not to express their anger toward President Trump."

The Forty-Fourth: A Perspective on the Odyssey of President Barack Obama (2008–2016) with Reflections on Lincoln Parallels is available now on Amazon, Apple iBooks, Barnes and Noble, and Shop.BookLogix.com. 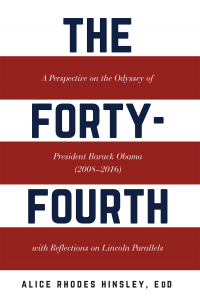