Bern, Switzerland -- (ReleaseWire) -- 03/15/2018 --As sustainable, clean energy becomes more desirable and reducing the world's reliance on fossil fuels becomes more critical, scientists are looking for new ways to generate electricity. One of the most exciting developments in this area is the possibility of harnessing the power of the jet stream to produce energy.

The jet stream is one of the most powerful energy sources in the world, but it will require dedicated effort to make high-altitude wind power a reality. To help draw attention to this cause, professional skydiver, Marc Hauser, plans to attempt to set a world record for speed while skydiving in the jet stream.

He'll document the entire story in a documentary film that will ultimately air on BBC World News TV and will also be available for rent or purchase on Vimeo. The goal is to bring knowledge of jet stream wind power and all its possibilities to the masses to encourage more consumers to demand clean energy from their power companies, pushing them to bring this concept to fruition.

In his attempt to set a new world record, Hauser will ascend to more than 34,000 feet above sea level in a hot air balloon. From this height, he will skydive through the jet stream, using the tailwind to boost his speed. Typically, the wind speed is about 150 kilometers per hour, but Hauser's team is still searching for the ideal location for the jump in hopes of finding even faster wind speeds. Currently, the top candidates are Switzerland and Australia.

To help make his dream become a reality, Hauser has launched a crowdfunding campaign on Indiegogo. The funds raised will go towards the equipment and staff needed to film the documentary. At the time of this release, the campaign had generated nearly $19,000 in contributions towards its $80,000 goal.

Hauser aims to make the jump in late March or early April, depending on the specific jet stream conditions at the time. He expects the film, directed by Claudio von Planta, to be released by the end of 2018. 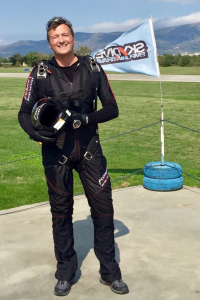 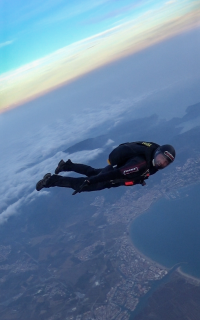