It is obvious that a nation can dream big and make giant moves but how sustainable can such a dream be if it remains in the position of a fragile state and fails to address the historical grievances of its people?

Bamenda, Cameroon -- (ReleaseWire) -- 12/09/2015 --With deep empathetic concern for the peaceful wellbeing of its home based country, Modern Advocacy Humanitarian Social and Rehabilitation Association (MAHSRA), an NGO based in Bamenda – Cameroon and in Consultative Status with the United Nations Economic and Social Council ECOSOC [2013], highlights the short comings and the lapses within the country's protective institutionalism towards its great investment ventures as an aspiring 2035 emerging nation.

Notably, because of countless struggles and sporadic civil strives across the world, most especially the cases of the recent 2011 Arab spring within the heart of North Africa, numerous analysts and conflict forecasters have attempted to identify similar series of identical elements that sum-up to topple or ignite the fall of virtually stable regimes and autocratic governments. Due to the current needs to prevent eventual occurrences of major conflicts within countries that demonstrate similar country assessment risks for uprisings as previous case studies, this publication elaborates on some reasons why effective preventive measures should be taken in country cases still existing in virtual peaceful states.

As an example, for the fact that Cameroon has developed a very huge and ambitious development 2035 vision towards becoming an emerging nation, the need and ways to protect the huge institutional and infrastructural investments towards maintaining this vision becomes a necessity, should civil instability and major strives arise. This implies investigating the country's hurting history that could build vengeful thoughts in the citizenry minds.

Thus, in order to address the historical disappointments and deep grievances of the severally disfavoured Cameroonians, the CEO of MAHSRA, Dr Kelly Ngyah, traces the Country's history of major conflicts that has remained unresolved in the minds of several citizens.

Also, since the country has developed a major dream and vision for the well-being of its future generations, the CEO worries about the eventual occurrence of a national civil uprising which may instill or provoke a destructive spirit in the minds of its youths to demolish huge national investments. Advancing points to demonstrate the government's short comings towards its visionary step and emphasizing on the need for the effective institutionalization of peace instances within the country's 2010/2020 growth and employment strategy paper, the author's fears within this country which has already been classified as a fragile state, are addressed from two angles:

1) Do the Cameroonian people actually care about or believe in this ambitious policy that ought to be an idea worthy to celebrate? and

2) Has the government truly considered the citizenry ideas upon this development plan before instituting it?

Besides the publication, MAHSRA as well, indicates that it is undergoing a series of research works on community conflicts' intervention schemes and best ways for integrating pragmatic peace policy development and direct peace activity growth within local, national, intergovernmental, and international frameworks. And thus, is highly soliciting support from the public.

Supporting and/or partnering with this organization and still obtaining a specialized copy of this document will entail sending a MAIL with subject: Probable Hurdles in the Cameroon 2035 Dream

Who is Dr. Kelly NGYAH?

Note: Supporters of MAHSRA's initiatives are also informed that, information on partnership as one of the donors of MAHSRA's Peace and Development works, may be published on the organizational website as it becomes necessary. As such, there is need to confirm in writing to MAHSRA, if a supporter's name should be included and/or published within the organization's funders' bulletin.

The Forum for this piece is spotted at: MAHSRA FORUMS: 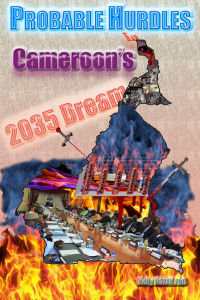