Presently in pre-production for the short film, Director Rebecca Murga, Producer Karen Kraft, and Executive Producer and Screenwriter Catherine Hardin are working together to make the film a reality after meeting through the Veterans in Media and Entertainment.

Kraft, along with being a Producer for over 20-years and present Chair of the Board of VME, knows full well the importance of veterans being storytellers.

"Military veterans have been writing and directing in this industry since the dawn of Hollywood," said Kraft. "It's exciting to see this new group of storytellers from this era of veterans tell the stories they are most passionate about."

"I think storytelling is a way to shed light on topics that are sometimes forgotten about," said Murga. "After reading the incredible CAPTIVE script, there was no other film I wanted to make at this moment and no other story that was as important to me as someone coming from a family of immigrants and a population that is directly affected by the trafficking of women. Plus, having a core team of women who are also veterans just makes the project even more special."

CAPTIVE follows a young, timid, carnival worker, who is kidnapped by a clown. Along the way, the protagonist is rescued by an unlikely hero, as the film delves deeper into the misunderstood topic of human trafficking in our world today.

The team begins shooting CAPTIVE in Los Angeles starting this October. Hardin is presently developing a television series based on the short script, which is why the producers elected to launch a Seed & Spark campaign this summer.

"Seed & Spark provides filmmakers with the footing and platform they need to have their story heard – that's why we've chosen it for raising our capital," said Hardin. "Spread the word on the launch of our campaign and highlight a film that sheds light on child trafficking, a topic that needs to be discussed."

For more information, or to follow for updates, visit: www.captivefilm.com.

To learn more about the Seed & Spark campaign, visit: www.seedandspark.com/fund/captivefilm. 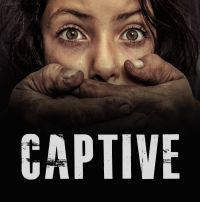