“I never thought I’d actually be living in my own car! But I really believe in the vision and the team around me. Together, we are creating something bigger than all of us. That’s what this project is really all about.”

Project Pete Ford’s music is free to listeners, and his website sells truly unique music products and services, such as personal serenades, lessons, and even an option to literally buy happiness! Fans can also visit the website to purchase tickets for upcoming shows at wildly bizarre venues! According to Ford, “It’s way more fun this way. And everybody knows, fun rules!”

Ford creates music simply because he loves the craft, not the cash. All profits are loaned to third world entrepreneurs to start and grow their own businesses. He is dedicated to helping others and works closely with the nonprofit organization Kiva, which helps empower entrepreneurs all over the world. Kiva’s vision is to alleviate poverty by leveraging the Internet to finance small businesses. They work with 78 different countries, even in the most remote areas of the globe, funding loans and changing lives.

Project Pete Ford is busy recording his first album, Bohemian Dream, which is expected to come out early next year. Deeply inspired by the movies ‘Inception’ and ‘Waking Life,’ Ford is determined to write an entire album in his dreams!

Originally a business student at Miami University, Ford had an epiphany to literally follow his dreams! He quickly dropped out and moved to Buenos Aires, Argentina, where he began his musical journey and quest for self-growth. Eventually coming back to reality, Ford continued his study of music in Chicago, graduating with honors from Columbia College.

“So far, the love and support for this project has been overwhelming! It’s really inspiring to see thousands of people all paying it forward! I believe the recipe for real happiness is simply to give and be grateful. It sounds cheesy, but don’t knock it until you’ve tried it!”

See how you can pay it forward at www.projectpeteford.com 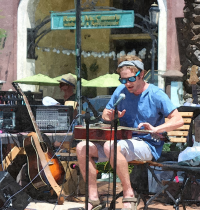