"We work hard every day to show that we are 100 percent committed to fulfilling our mission. This recognition helps strengthen our credibility in that effort and provides donors with greater confidence in their support of our organization," said Project Sanctuary founder Heather Ehle.

Platinum is the highest level of recognition from GuideStar, which serves as a clearinghouse of non-profit information. Non-profits in the Platinum program demonstrate that they are focused on measuring progress and results, giving potential donors access to the information they crave most. The metrics provided by participating non-profits also provide a concrete alternative to donors who may be evaluating an organization based solely on its overhead ratio.

Charity Navigator, which evaluates more than 1 million non-profits nationwide, first awarded Project Sanctuary a four-star rating last year and recently renewed that rating. The four-star rating is reserved for organizations that exceed industry standards and outperform most charities dedicated to a similar cause. Charity Navigator's ratings are based on a variety of metrics examining financial performance, accountability and transparency.

Project Sanctuary allocates 87 percent of its expenses to programs and services, and spends just 5.8 percent of its budget on administrative expenses. The organization also has independent voting board members who are not compensated for their service.

Founded in 2007, Project Sanctuary is marking several milestones on its 10th anniversary. Over the last decade, the organization has hosted more than 1,000 families (comprised of over 4,000 individuals) at more than 120 retreats in seven states. Ninety percent of the families served by Project Sanctuary are still intact, and 2,000 families are now on the organization's retreat waitlist.

About Charity Navigator
Charity Navigator is the largest expert charity evaluator in America. The organization helps guide intelligent giving by evaluating the Financial Health, Accountability and Transparency of charities and by providing data about 1.6 million nonprofits.

Charity Navigator does not charge the organizations it evaluates, ensuring unbiased evaluations, nor does it charge the public for this trusted data. As a result, Charity Navigator, a 501(c)(3) public charity itself, depends on support from individuals, corporations and foundations that believe it provides a much-needed service to America's charitable givers.

About GuideStar
GuideStar is the world's largest source of nonprofit information, connecting people and organizations with data on 2.5 million current and formerly IRS-recognized nonprofits. Each year, more than 8 million people, including individual donors, nonprofit leaders, grantmakers, government officials, academic researchers, and the media, use GuideStar data to make intelligent decisions about the social sector. GuideStar Nonprofit Profiles are populated with information from the IRS, directly from nonprofits, and via other partners in the nonprofit sector. In addition, users see GuideStar data on more than 200 philanthropic websites and applications. GuideStar is itself a 501(c)(3) public charity.

About Project Sanctuary
Project Sanctuary focuses on strengthening military families during the stressful times of deployment, transition and reintegration, offering retreats nationwide. In 2017, the organization will offer 27 retreats to serve military families and will also continue outreach to the 2,000 families on its wait list to provide pre-retreat assessment and crisis intervention. Project Sanctuary uses the A.R.T. model - Assess (pre-retreat support services), Reconnect (six-day therapeutic retreat for the whole family), and Thrive (two years of follow-up services). The program is unique in its treatment of the family as a unit while also working with each family member individually to assess their needs. The overall goal is easing the reconnection of families previously distanced as a result of deployment and military service, including resultant injuries. 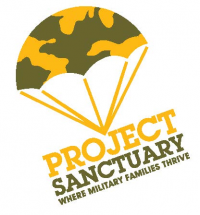